What is the Antikythera mechanism ? In October, 2005, a truck pulled up outside the National Archeological Museum in Athens, and workers began unloading an eight-ton X-ray machine that its designer, X-Tek Systems of Great Britain, had dubbed the Bladerunner. Standing just inside the National Museum�s basement was Tony Freeth, a sixty-year-old British mathematician and filmmaker, watching as workers in white T-shirts wrestled the Range Rover-size machine through the door and up the ramp into the museum. Freeth was a member of the Antikythera Mechanism Research Project�a multidisciplinary investigation into some fragments of an ancient mechanical device that were found at the turn of the last century after two thousand years in the Aegean Sea, and have long been one of the great mysteries of science. Freeth, a tall, taciturn man with a deep, rumbling voice, had been a mathematician at Bristol University, taking a Ph.D. in set theory, a branch of mathematical logic. He had drifted away from the academy, however, and spent most of his career making films, many of them with scientific themes. The Antikythera Mechanism, which he had first heard about some five years earlier, had rekindled his undergraduate love of math and logic and problem-solving, and he had all but abandoned his film career in the course of investigating it. He was the latest in a long line of men who have made solving the mystery of the Mechanism their life�s work.

Another British researcher, Michael Wright, who has studied the Mechanism for more than twenty years, was coincidentally due to arrive in Athens before the Bladerunner had finished its work. But Wright wasn�t part of the research project, and his arrival was anticipated with some trepidation. It had been Freeth�s idea to contact X-Tek in the hope of finding a high-resolution, three-dimensional X-ray technology to see inside the fragments of the Mechanism. As it happened, the company was working on a prototype of a CAT-scan machine that would use computer tomography to make 3-D X-rays of the blades inside airplane turbines, for safety inspections. Roger Hadland, X-Tek�s owner and chief engineer, was interested in Freeth�s proposal, and he and his staff developed new technology for the project.
Publicada por Ufomania - The truth is out there à(s) 12:13 PM No comments: Hiperligações para esta mensagem

UFO over the Great Wall

Publicada por Ufomania - The truth is out there à(s) 10:33 PM No comments: Hiperligações para esta mensagem

Up to half' of Mars may have ice 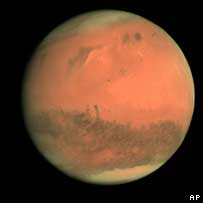 Scientists in the US say that initial data from a new way of scanning Mars has shown up to half of the Red Planet's surface may contain ice.

The new method of scanning for water offers vastly more accurate readings than before, they say.

The data could prove vital for the Phoenix Mars Mission which launches this August and which will put a lander on the surface to dig for ice.

The new data shows wide variation as to how deep below the surface ice exists.

Most accurate Investigation into UFO's ever

Publicada por Ufomania - The truth is out there à(s) 7:33 PM No comments: Hiperligações para esta mensagem