HAS HOLLYWOOD BEEN INFILTRATED BY VAMPIRES? 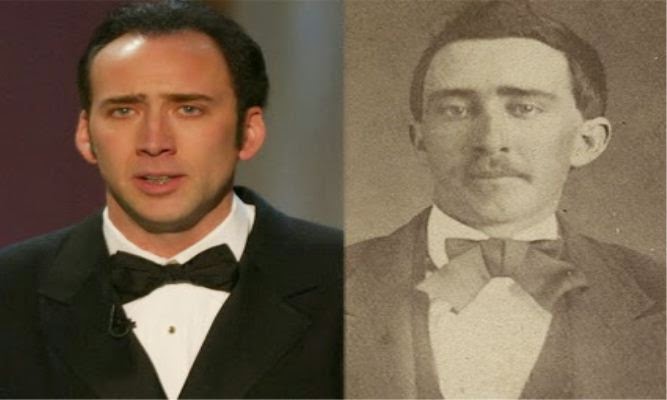 The debate concerning whether Nicolas Cage is a vampire continues to gather pace, even though Cage himself has denied the rumors.

The story started a few years ago when a photograph purporting to be Cage, and dating from the 1800s was listed on Ebay for a whopping $1 million dollars, it later went viral on the internet.
The photo featuring a Cage look-alike sitting in a chair is apparently a Civil War era photo of a Confederate prisoner, who went by the names Lt. G.B. Smith or Lt. Robert M. Smith, and taken sometime around 1870 at Johnson’s Island prison camp in Ohio. The Ebay listing was mysteriously removed a few days later.
The story doesn’t end there.
A man calling himself Jonathan, called into the popular radio show “Coast to Coast” claiming he was a vampire, he also claimed to have been recruited by black government agencies to conduct “Wetwork” (euphemism for murder or assassination, alluding to the of spilling blood).

Was this caller Nicolas Cage?
The caller also relates how he was assisted by “others” who helped him escape the clandestine operations run by the Men in Black.
Could these “Others” be Hollywood celebrities, who are also Vampires?
Its no secret that Cage has a keen interest in vampires and the weird, he recently sold a 1931 Dracula poster for $310,000 and has just had a 9-foot tall pyramid-shaped super-tomb built in New Orleans.
He also spent the night in Count Dracula’s castle while filming his Ghost Rider sequel on location in Romania.
Cage is not alone however, John Travolta, Keanu Reeves and Alec Baldwin, have all been accused of being Vampires.

Paul Mounet was a doctor, and then became an actor, the rise of the medical science could have been a problem to an immortal, but by becoming a baron of the medicine, he could have gained protection from any kind of inquiry about his everlasting appearance.
Mounet allegedly died in 1922 although his body was never found, could Mounet be Keanu Reeves?

Check out a few more below and decide for yourselves whether there is a secret group of Vampire immortals who have infiltrated Hollywood. Sometimes truth is stranger than fiction.

Publicada por Ufomania - The truth is out there à(s) 1:15 PM