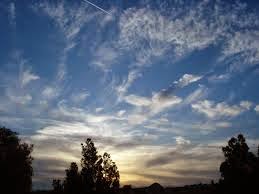 In an odd piece of video uploaded to YouTube over the weekend, what appears to be a strange “cloud” formation resembling a double-helix was filmed over Auckland, New Zealand.
Then, approximately one minute into the video, it becomes apparent that the formation was no cloud at all, but some variety of exhaust being produced by an aircraft, which slowly begins to descend as it moves away toward the horizon.
The user who uploaded the video, portiasukiotisluca, included the following comments about the incident:

Got up to look out the back window and saw this dark vertical cloud so started filming.
The cloud started to “unwind” into a helix type thing so I kept filming. 50 seconds in, an object appears out of the bulbous end of the cloud and flies down to the horizon.
Definitely no commercial flight–any ideas what it could be? How was it out of sight for that time?

Source: The Gralien Report
Publicada por Ufomania - The truth is out there à(s) 8:46 PM