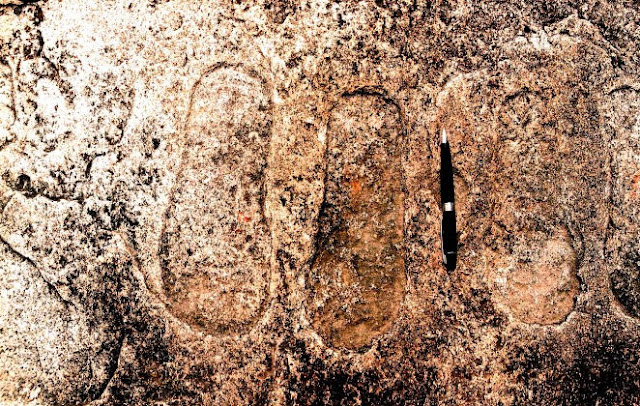 Are the footprints embedded in rock in India evidence of ancient astronauts?
A village in central India has fueled discussions on numerous social networks about the discovery of a mysterious set of "footprints" embedded in rock next to depictions of a flying object.

The village in question is called Piska Nagri, and it is located in the outskirts of the city of Ranchi in the State of Jharkahnd. This is where geologist Nitish Priyadarshi has been studying mysterious and striking footsteps, which according to local legend, could prove to be evidence pointing towards the presence of sky gods who landed at the region in the remote past.

The footprints are located on rock and look as if they were made with wooden sandals commonly used for thousands of years by the inhabitants of the region. One of the tracks is 28 centimeters long and 11 centimeters wide. It is believed that the god-kings of Hindu mythology, Lord Rama and Lord Lakshmana, spent time in this area while searching of Rama's wife, Sita. 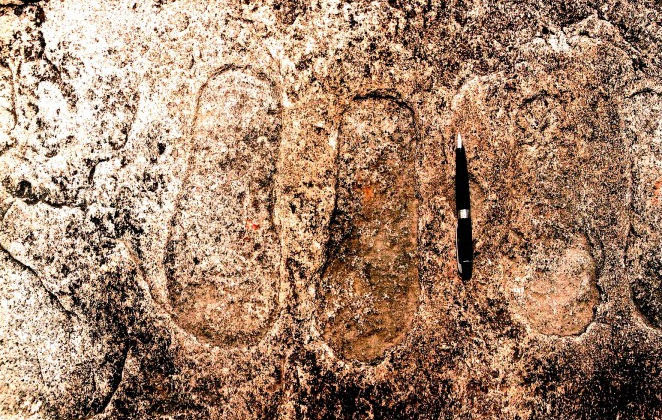 According to Priyadarshi the traces are made of granite, and thus were recorded rather than carved out of solid rock. "They might have been made by hand by local people of that time to commemorate the visitors," said the geologist.

Interestingly the most amazing part is that next to these striking footprints, there are depictions of what appear to be flying objects.

The footprints and UFO's appear to be part of the identical scene, they might have been created on purpose by ancient man who tried to explain how these "sky gods" came to Earth.

The age of the tracks has not yet been officially clarified. "Looking at the wear and tear, the product erosion and climate, one can say that the age of these mysterious depictions could be over thousands of years if not more. Interestingly, throughout history there were many archaeological discoveries of footprints, including what appear to be boots and other strange findings scattered in different parts of the world." 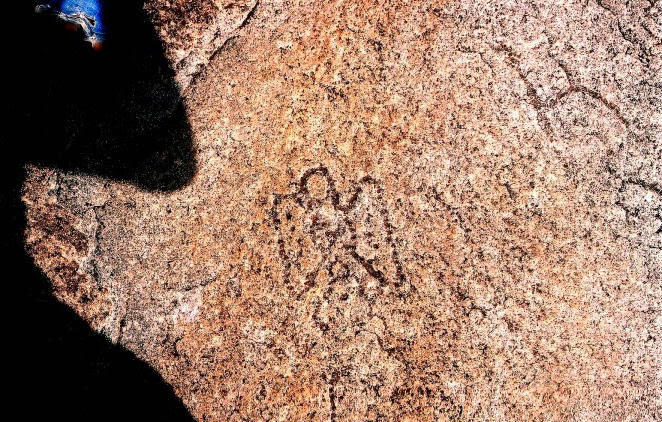 In ancient times, the Romans recorded footsteps before going on journeys as a ritual of protection, which they believed would ensure them a return without problems. In Ireland and other parts of Northern Europe, footprints in rock were associated with royalty and leadership.

Despite intensive investigation and with all of our advanced technology, it seems that we have not been able to decipher a small percentage of our ancient history. There are numerous ancient sites that remain a mystery to archaeologists and researchers.

Each year, new discoveries are being made, and all of these seem to indicate that we have very little knowledge when it comes to ancient civilization that inhabited Earth in the distant past. Perhaps, it is time to change our approach on these subjects, and maybe then, we will find answers to many questions that have so far, remained unanswered.
Watch also:

Publicada por Ufomania - The truth is out there à(s) 10:13 AM No comments:

The Mysterious "Gate of the Gods" at Hayu Marca, Peru

An ancient legend speaks of a mysterious door which is located in the vicinity of Lake Titicaca. This door, will open one day and welcome the creator gods of all mankind. These gods will return in their "Solar Ships" and all mankind will be in awe.Strangely such a door seems to exist according researchers. Located near the mountainous region of Hayu Brand, 35 Km of the city of Puno in Peru, we find the mysterious "Gate of the Gods".Since immemorial time, this region has been revered by local natives who actually consider it as the "city of the gods" Even though a few structures have been discovered, researchers believe that there are numerous monuments hidden beneath the surface.This "Gate" was discovered by accident when local tour guide Jose Luis Delgado Mamani was hiking in the surrounding area. Curiously Mamani stated that he had long before dreamed about this structure and saw what appeared to be a door covered with pink marble with several figures located to the sides.

These visions are closely linked to the legends of the native Indians of the area that tell that this "door" was a "gateway to the land of the Gods". Legends speak that in the distant past, great heroes crossed into the land of the gods, enjoying a prosperous and glorious immortal life.Another legend says that during the time of the Spanish conquest, an Incan priest called Amaru Muru, from the temple of the seven rays fled from his temple with a sacred golden disk known as "the key to the gods of the seven rays". The priest hid in the mountains of Hayu Brand afraid that the Spanish might take the key from him.
Later the priest arrived at the "Gate of the Gods" at Hayu Marca, where he showed the key to several priests and shamans of the area. After they performed a ritual, the door opened with a blue light emanating from it.

The priest, Amaru Muru handed the golden disk to one of the shamans and entered the door, he was never seen again.Mysteriously, researchers have found a circular depression to the side of the door where a smaller disk-shaped object could have been placed.Visitors who have traveled to the "Gate of the Gods" at Hayu Marca, and who have placed their hands on the small door state that they feel a great energy that flows through their bodies, they have also described strange visions like stars, columns of fire and music which some described as being "rhythmic, unusual and extraordinary".

The Gateway of the Sun from the Tiwanku civilization in Bolivia
Is it possible that there are "portals" located on Earth which are connected to other galaxies? planets? dimensions? And that one of those portals is the "Gate of the Gods" at Hayu Marca? Is it possible that these ancient texts are more than just stories of the past? And that there is something true and unique about them? We look forward to finding out more about these mysterious locations and there hidden secrets.By Ivan, EWAO
Publicada por Ufomania - The truth is out there à(s) 9:58 AM No comments: