Publicada por Ufomania - The truth is out there à(s) 1:53 PM No comments:

Publicada por Ufomania - The truth is out there à(s) 12:24 PM No comments:

Anunnaki Structures Before the Flood

Publicada por Ufomania - The truth is out there à(s) 11:46 AM No comments:

Publicada por Ufomania - The truth is out there à(s) 7:34 PM No comments:

Publicada por Ufomania - The truth is out there à(s) 3:09 PM No comments:

The Life and Legend of the Aldworth Giants 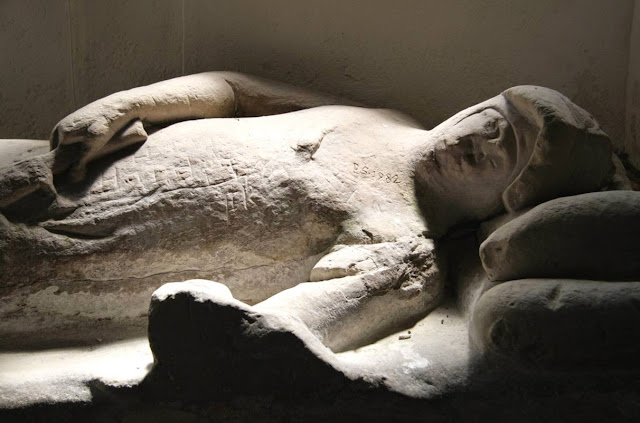 In the simple, tiny church of St. Mary, Aldworth there lie the nine stone statues of what have become known as the “Aldworth Giants,” a name bestowed upon them because all are over 7 feet tall and are said to be life-sized representations of the de la Beche family members.

After Duke William of Normany crossed the English Channel and took London, his supporters followed in search of lands and wealth. The de la Beche family was among them. They received numerous properties and built two castles, one of which was in Aldworth. Though the castle no longer stands, the church houses the last of the family’s descendants. 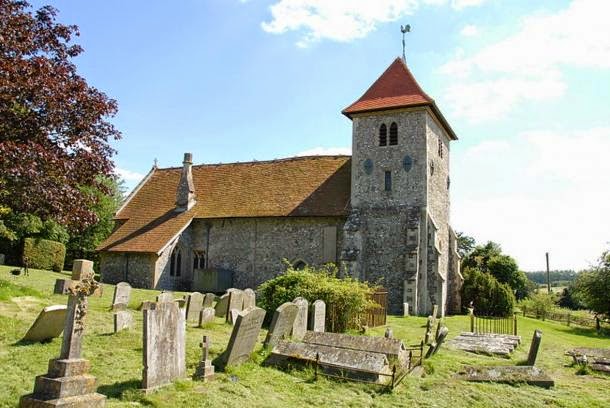 The de la Beche family was very influential in the first half of the 14th century, and many of the family members represented in the church were knights. Sir Robert, the eldest member of the family buried here, was knighted by King Edward I, and his grandson, Sir Philip was valet to Edward II, and was also sheriff of Berkshire and Wiltshire in 1314. He and his sons took part in a rebellion against King Edward II in 1322. The opposition was defeated, however, but as luck would have it they were captured and imprisoned for five years instead of being beheaded. In 1327, Edward III, who was now king, absolved them and restored their lands and positions to them.

Sir Philip’s son, Lord Nicholas, went on to become an integral in the English empire under Edward III. He served as steward of the province of Gascony, Constable of the Tower, and custodian of Edward III’s first son until his death in 1346.

While their lives were impressive, the de la Beche memorials prove to be even more so. They fill the small church, as if reminding onlookers of their greater than life accomplishments. The first family members first to be seen upon entering the church are Sir Robert de la Beche, his son Sir John, and John’s son Sir Phillip, who are under arched tracery along the north wall. Sir Phillip had six sons and a daughter: John, Philip, Nicholas, Edmond, Robert, Edward, and Joan. The nave of the church houses the effigy of Phillip’s first son, Sir John, along with Sir John’s wife, Isabella, and his younger brother, Lord Nicholas de la Beche. Lord Nicholas’s brother, Sir Philip, and their mother, Lady Joan, lie along the south aisle of the church, also under arched stone canopies. The last remaining effigy is of Lady Isabella’s son John, who died in 1840. It is at this time the effigies are believed to have been constructed, as this family line soon became extinct. 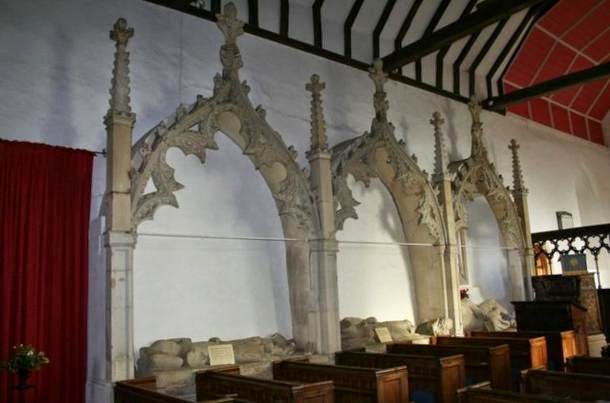 Canopies inside St Mary's church holding effigies. There are nine in all belonging to the de la Beche family dating from 1278 to 1340. (Wikimedia Commons)

Though the stone monuments can still be seen today, they were vandalized during the Cromwell regime and consequently are badly mutilated, missing limbs and other appendages. The most extreme damage was done to Lady Isabella and Young John, who are both missing their heads. One effigy has disappeared altogether, that of John Ever Afraid.

So who, pray tell, is John Ever Afraid? Legend claims the magnificent stone memorials found in St. Mary’s Church actually belong to giants known as John Long, John Strong, John Never Afraid, and John Ever Afraid. This is speculated to be due to the immense size of the effigies. While little to nothing is said about the prior three, the legend of John Ever Afraid is quite famous. The tale claims that he sold his soul to the Devil for earthly riches. According to their bargain, the Devil could claim John’s soul upon death whether he was buried outside or inside of the church. Tricking the Devil, his body was buried within its walls, and his effigy was placed in an alcove on the outer wall of the church. 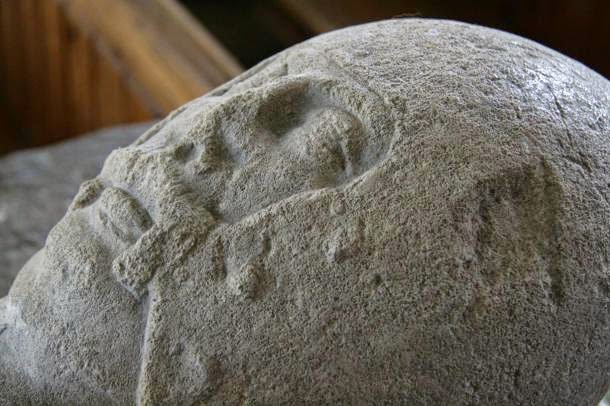 So what happened to John Ever Afraid? His body is said to have been buried under the wall where the arch appears on the outside. His mystery of his missing effigy may never be solved, though there are theories as to where it ended up. One such theory is that it was moved to Saint Lawrence Church Hungerford.

A parade performed during the summertime Corn Exchange outdoor event throughout West Berkshire tells the tale of John Ever Afraid. Put on by the Irish outdoor theatre company, masked puppets take over the streets as an 18-foot giant puppet representing John Ever Afraid comes out of hiding. Confused from 600 years of sleep, he has to elude the Devil and his minions. It is a family-friendly event that celebrates the rich mystery surrounding this local legend.

Publicada por Ufomania - The truth is out there à(s) 8:17 PM No comments:

Publicada por Ufomania - The truth is out there à(s) 3:22 PM No comments:

Swastika An Ancient Symbol Used For Over 3,000 Years

Publicada por Ufomania - The truth is out there à(s) 11:11 AM No comments: