A Fossilized Dragon Man at a Museum in Japan?

Publicada por Ufomania - The truth is out there à(s) 9:45 PM No comments:

Publicada por Ufomania - The truth is out there à(s) 11:36 PM No comments:

Bodies Of Strange Creatures Were Found In The Basement Of An Old House I...

Publicada por Ufomania - The truth is out there à(s) 1:02 PM No comments: 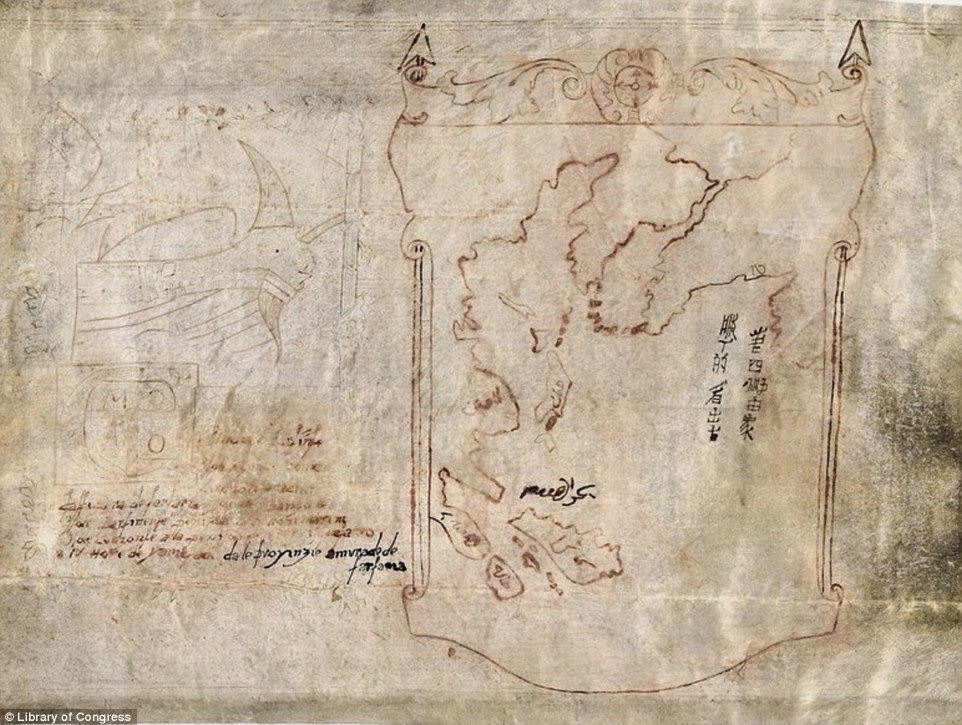 A crude map drawn on sheepskin shows what appears to be the Bering Straight, Alaska, the Aleutian Islands and the west coast of North America.

'Map with Ship' comes from a trove of 14 documents that have just been studied in depth for the first time. They were found in the 1930s in a trunk in that belonged to an Italian immigrant who settled in San Jose, California.


'Map with Ship': This sheepskin map is claimed to be a copy of a sketch Marco Polo made showing Alaska, the Aleutian Islands and the Bering Straight in the 13th century

The documents, reportedly written by Polo's daughter Bellala recount how the Venetian explorer met a Syrian trader on the Kamchatka Peninsula on the far eastern edge of the Asian continent then sailed across the Bering Straight to North America.

Before his voyage, the trader told Polo about a land far east - a 40 days voyage from Kamchatka,Smithsonian Magazine reports. 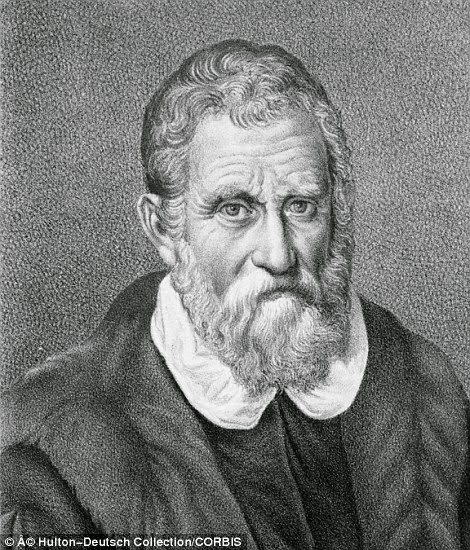 This new land, the documents say, was called 'the Peninsula of Seals' and it was 'twice as far from China' as Kamchatka and Polo soon set sail in search of it.

The documents also describe a great glacier that came down into the sea.

It appears that Polo then sailed around the Alaskan coast - possibly even around the Aleutian Islands, east to British Columbia and down the Canadian coast.

One expert, who authored a Website called MarcoPoloinSeattle.com even claims that the Venetian explorer even made it to Washington and Puget Sound.

If the documents are authentic, they could overturn commonly held beliefs about Columbus' 1492 voyage from Portugal.

'It would mean that an Italian got knowledge of the west coast of North America or he heard about it from Arabs or Chinese,' historian Benjamin B. Olshin, a history professor at University of the Arts in Philadelphia, told Smithsonian.

His book, The Mysteries of the Marco Polo Maps, is due out in November.
The documents have been in the Library of Congress since the 1930s and were even analyzed by J. Edgar Hoover's FBI.

The account, while fascinating, has several holes. The first is that Polo - an infamous teller of tall tales - never specifically mentioned his travels to this new land in his world-famous account of his journey, The Travels of Marco Polo.

He did, however, say on his death bed, 'I did not tell half of what I saw.'
Second, the source material remains dubious. Marcian Rossi, the immigrant who donated the documents to the Library of Congress, says he inherited them from a wealthy family member.

Carbon dating on one of the sheepskin maps reveals it was created in the 14th or 15th century - meaning that even if it is authentic, it is a copy of the original.

Still, the Bering Straight was not discovered until the mid-18th century - three hundred years after the document was made.

The ink on the map, however, has not been tested - meaning it could have been forged after the sheepskin was created.

Gunnar Thompson, a controversial historian and the author of MarcoPoloinSeattle.com, also studied the documents in depth and argues that the landmarks that Polo laid out match up with remarkable accuracy to Chinese maps that date from before Polo's time - as well as maps that came after.

MARCO POLO: THE MAN WHO BEGAN EUROPE'S OBSESSION WITH THE EAST

Marco Polo was a 13th century Italian merchant from Venice. And while he wasn't the first European trader to travel into China, his detailed account of his journey, Book of the Marvels of the World or The Travels of Marco Polo, made him the most famous.
His tales of traveling the Silk Road through Eurasia and befriending the Mongol emperor of China Kublai Kahn captivated Europe and helped fuel the Western obsession with trading with the East. Christopher Columbus set sail for India in 1492 after having been inspired by his writing.
At age 17, Polo set off with his father and uncle - both Venetian merchants who grew wealthy trading with the east - on a journey to China. They returned 24 years later with a host of treasures and incredible tales.
The three Polos traveled over-land for three and a half years before reaching Kublai Kahn in China. The Kahn, one of the most powerful emperors to ever rule China, had met Polo's brother and uncle on a previous voyage. They were the first Western men the Kahn had ever seen.
In China, the Polo became close the the Khan - even carrying out missions across China and as far away as Burma as his emissary.
In 1292, the three Polo left China and traveled back to Italy - returning in 1295.
When he arrived in Venice, to find the city-state at war with the Republic of Genoa. He took up arms and was captured in 1296 following a naval battle.
From a Genovesi, he dictated the tail of his travels to his cellmate, who wrote them down into what later became The Travels of Marco Polo.
Polo was released in 1299 and married. He had two daughters and died at age 69.
He says that distortions in how the map is drawn - for example, the Bering Straight appears as a north-south passage and not an east-west passage - can be chalked up to magnetic distortions in Polo's compass readings that occur that close to the North Pole.

Calculating for the distortions shown on Polo's map, Thompson estimates that Polo made it all the way around Alaska and down to British Columbia before turning back.

Thompson, who described himself as a 'history detective,' posits that Polo even alluded to a 'Land of Darkness' beyond the plains of Mongolia, in the Travels of Margo Polo. He posits that Polo was referring to Alaska.

Thompson suggests that Polo's exploration could have been sent on a mission by Kublai Khan - the Mongol ruler of China whom Polo befriended.

Polo was meant to explore the far reaches of the empire in order to determine the source of furs, precious stones, gold, perfumes and dyes that were being imported into the Yuan Dynasty in China. 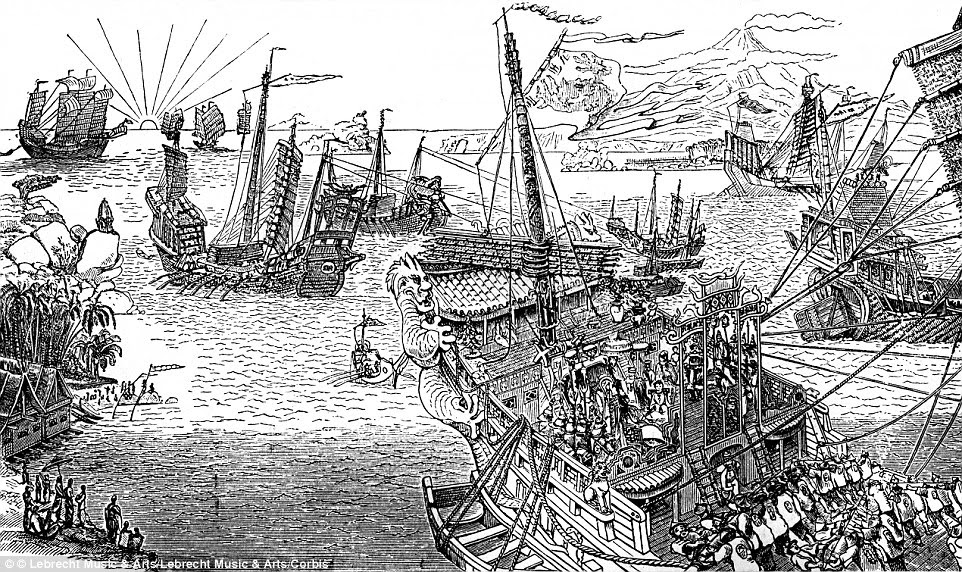 +4
Marco Polo's ship, pictured here in this engraving, reportedly sailed across the Bering Straight to the 'Peninsula of Seals'

Publicada por Ufomania - The truth is out there à(s) 10:26 AM No comments:

Publicada por Ufomania - The truth is out there à(s) 9:55 PM No comments:

The Enigmatic Pyramids of the Amazon

Publicada por Ufomania - The truth is out there à(s) 12:28 PM No comments: