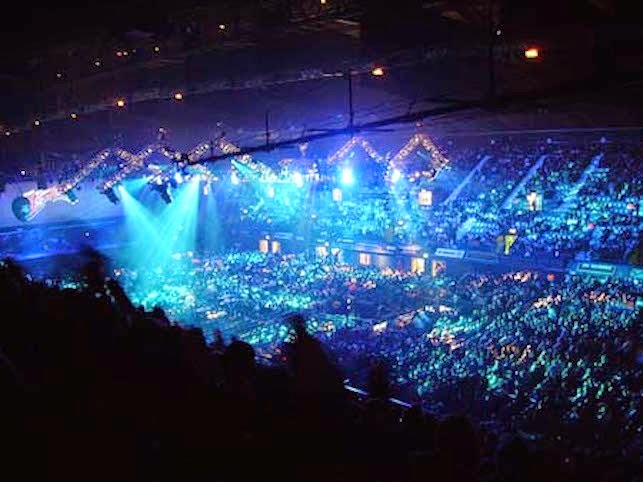 One of the world’s most loved and mocked public figures; the former BBC TV sports presenter, author and speaker, David Icke, has come a long way since that infamous Wogan interview of 1991, achieving something of a cult status if Saturday’s marathon Wembley performance is anything to go by.
For over ten hours, Icke held the attention of close to 12,000 people, some of whom had flown in from around the globe, as he challenged just about every societal norm, belief and assumption about the nature of reality, plunging deeper down the rabbit hole than most conspiracy theorists have dared.
“The nutter is back,” he roared, as he took to the stage, before deftly turning the idea back on to his detractors – the people imposing our “fake reality,” through “The Bubble Program” of state controlled education, media, science, politics, medicine and law.
“We need the end of ‘normal’”

Wembley performance saw Icke hold audience in the palm of his hand for ten hours
Warming to his theme, Awaken, Icke wasted no time hammering home the idea that we are living in a madhouse we have accepted as normal.


“There’s no need for a single person to be hungry or homeless on this planet,” he admonished. “Most people are caught up in the program. Others who can access another reality are called mad.”

The vast majority of us are unknowingly suffering from an unhealthy slave mentality, he said. We are experiencing the psychological phenomena of cognitive dissonance, where our beliefs and behaviour are in conflict, and Stockholm syndrome - the traumatic bonding with a captor. This was all cheerfully summed up as “The Bamboozle.”Icke drew on the works of pioneering artists, thinkers and scientists to support his theories. Names like: Nikola Tesla, Leonardo Da Vinci, Osho, Einstein, Carl Sagan, Bob Marley and Gandhi, flashed up on the big screen in quick succession.Our ability to “decode reality” is linked to what we are able to perceive, he went on. Sages and shamans have long been able to see beyond the narrow frequency range of visible light.It’s no coincidence that the pineal gland located in the brain, also known as ‘the Mind’s Eye’, is being calcified with the introduction of fluoride into our water. 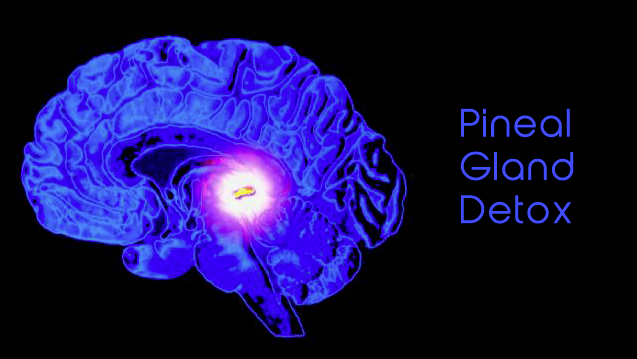 The crash course in metaphysics and quantum theory evolved to encompass the ubiquitous presence of electro-magnetic fields connecting everything.


“The heart is the body’s most powerful electro-magnetic field; it just knows,” he said.“And this is why they want to shut it down with depression, fear and worry. The brain obeys the heart. When the heart, brain and central nervous system are in harmony, we are in a high state of consciousness.”“The world is structured to put us into low vibrational states of emotion. Our reality is akin to the movie, The Matrix. We need to stop living the lie of who we are. We are in an intellect prison, and it can’t connect the dots to see the picture.”

The idea that the universe is a hologram existing in waveform information may be a harder concept to grasp for many, but with recent features in the New Scientist and the Scientific American, it’s gaining wider acceptance.The Archon Hijack

If the first three hours hadn’t shattered your false programming - assuming you arrived as ‘normal’- the next session could have been the hammer blow.Protesting and fighting the system is doomed to fail, boomed the indefatigable Icke, preparing his audience for an even bigger shift in perception.Politicians are just puppets, and it’s not the corporations who are directing events. When you go deeper, you see the Rothschilds, but that’s not all; twenty-five years of research has brought him to the conclusion that “reality is teeming with different impressions of life”.What people really need to wake up to is the fact that this reality has been hijacked by an invisible force the Gnostics used to call “Archons,” he said. This “truth” stored in the Great Library of Alexandria in ancient times, also known by the French Cathars and other cultures by different names, had to be destroyed, so that a “fake God” could be installed.


“The Archontic mind is the mind of the psychopath: no empathy or shame, no remorse, pathological liars. It’s the mindset seen in world leaders, and increasingly, the militarised police, and banking”, continued Icke flicking through images of EVIL to illustrate “the inversion of the word LIVE”.

Humanity has been kept ignorant of this death cult, and Archontic followers, like for example, Satanists and the Archontic media, are obsessed with death and killing. The All Seeing Eye printed on dollar bills is a symbol of the Archontic network.Most politicians are of the Archontic bloodlines or agents of them – psychopaths, and the legal system imposes the will of the political system. The Archon Agenda 21 is a plan to introduce the Hunger Games Society.

The Archontic mind is the mind of the psychopath:
no empathy or shame, no remorse, pathological liars
We’re heading towards a cashless world and “rabbit-hutch Britain” in human settlements. It’s already being projected as local community initiatives but it’s actually centralised through the EU.There’s a war on our health to systematically weaken us so they can walk in. If you’re sick, you’re easier to control. The big WMD is the war on human health, with Big Pharma literally “a crime scene” while they try to destroy alternatives.Reptilian hybrids possessed by ArchonsWhen Icke came out with the idea that reptiles rule the world, many years ago, he was roundly ridiculed and labelled mad. But disbelief is turning to respect, as more of his theories have come true, and several have been found to originate in old text texts.The existence of reptilian entities is one of the latter, having been described by the Gnostics nearly 2,000 years ago.


“Certain bloodlines were created to be vehicles of these entities, he continued, as the audience stared at reptilian illustrations of the royal family.“We’ve been infiltrated by a force taking over reality because they look like us. People will soon have to face the facts that this is why the world is how it is.”

“The reasons royals interbreed is to hold the information field which has certain personality traits the Archons want, because it has no compassion or empathy. The frequency of the hybrids is far more similar to the Archons than the rest of the population.”

The relationship between paedophilia and Satanism

Barely pausing for breath, Icke launched into a blistering attack on the establishment cover-up of paedophile rings, which are now, thanks to the Internet, blowing wide open.


“Paedophiles are infesting the establishment on multiple levels,” he said.“The number of children being abused all over the world is staggering. The reason that Satanism and paedophilia are interrelated is because paedophiles are possessed by these entities, which stimulate a desire for children and draw on their energy. Ted Heath was doing it, and Savile was supplying the rich and famous – which is why he was never prosecuted.”

Icke is convinced the truth will eventually come out, and when it does, the political establishment and Royal family will collapse. The cover-up is so blatant, he said, with New Scotland Yard acting as a “political paedophile protection unit.”“We can change our Archon World”The dot connecting that David Icke has become famous for, continued as he drew lines between different expressions of the same conspiracy.Radiation is much higher than it was 50 years ago, and chemtrails are part of the plan to take us away from infinite consciousness, he said. The influence of Archontic entities is changing the planet to make it feel more like home, to change the atmosphere into that of an “Archon World.”The transhumanist agenda, in which technology is inserted into the body, for example, by using microchips to replace drugs, is to make us become slaves of society. Archons are a robotic force and they want to make humans like them. The reptiles’ god is technology.Icke’s dystopian view of the future assumes that the masses will stay glued to their TVs, locked forever into the hive mind of the Matrix, which says ‘I have no power’. Is it a lost cause? “No way!” thundered Icke to rounds of applause.


“The solution is consciousness. As soon as we wake up, the game will be over. They are keeping us in mental and spiritual deception because they’re scared we’ll wake up. Joy, peace, love and compassion will change it. By disconnecting from the program, we take their power away.”

By following Icke’s example and not worrying about being ridiculed or ostracised for being our true selves, we have a real chance of changing the system, seemed to be his final message.He said:


“We need to transform our reality by changing our reality to truth and love, to be who we really are. A personal revolution is needed! The New Age movement is escapism; it’s in denial.“We are the revolution if we cease to conform to traditional reality. The conspiracy is coming down. The cracks are appearing. There’s a phenomenal wake up occurring in the world. The system will try to oppress it, but it won’t succeed because of the magnitude of the global awakening.”

Holding his audience still in the palm of his hand after ten hours of delivery, the king of conspiracy theory’s final words drew rounds of applause and a standing ovation.


“Remember this: No one rules if no one obeys.”

The audience adored him, and when tears came to his eyes, they loved him even more. 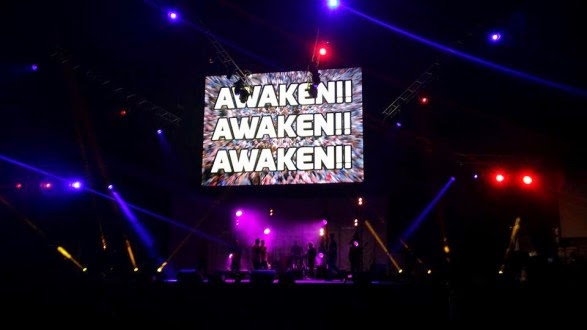 Publicada por Ufomania - The truth is out there à(s) 1:05 PM