Whale found a km from the coast in Utah, U.S.A.

Farmington| A dairy farmer from a small town near the Great Salt Lake in Utah, made an incredible discovery on his property while he was looking for one of his cows that had not returned. 69-year old Michael Woodson, found a 12 meter long humpback whale laying lifeless in the middle of one of his fields, hundreds of kilometers away its natural habitat.

The Farmington City Police was called on the site to investigate, since the farmer thought that the cetacean could have been left there as a creepy prank by some neighborhood youngsters. The investigators rapidly dismissed the possibility however, as no traces of vehicles or machinery large enough to carry it were found anywhere near the animal. The police admits that they are almost clueless at the moment as to how the marine mammal found its way on Mr. Woodson’s property. 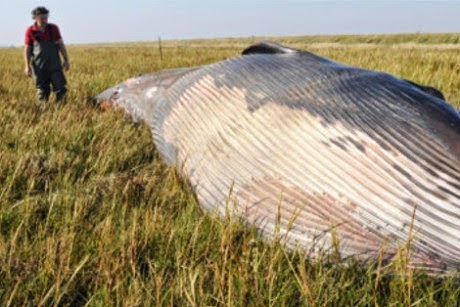 Publicada por Ufomania - The truth is out there à(s) 8:04 PM