Underground Pyramid at Tiahuanaco in Bolivia 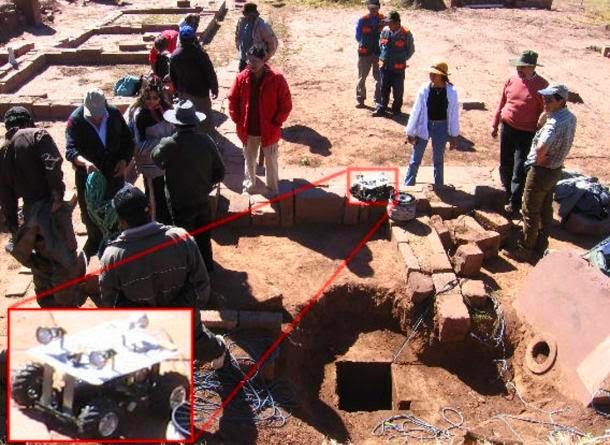 The ancient fortress site of Tiahuanaco (Tiwanaku) in western Bolivia is still revealing secrets thousands of years after its peak as capital of an empire, and home to one of the most important civilizations prior to the Inca.
Archaeologists from the Tiahuanaco Archeological Research Center have discovered an underground pyramid at the site using ground-penetrating radar.
According to Fox News Latino, the Bolivian government has announced excavations are set to begin this summer on the new find at the Kantatallita area of Tiahuanaco, 71 kilometers (44 miles) west of La Paz.

Using ground-penetrating radar, researchers also have reportedly found “underground anomalies” which they suspect might be monoliths, but further analysis will be carried out before reaching official conclusions.
Ludwing Cayo, director of the Tiahuanaco Archeological Research Center told EFE News Agency that Tiahuanaco will be undergoing further investigations over the next five years. This is welcome news to some, as the site and stone monuments may have suffered from exposure weathering 4,000 meters above sea level.
AcercandoNaciones reports that some of the ruins of Tiahunaco have become dilapidated, and some researchers suggest these might benefit from the protection of an indoor museum.
Tiahuanaco has been a United Nations Educational, Scientific and Cultural Organization (UNESCO) World Heritage Site since 2000.

Ponce stela in the sunken courtyard of the Tiwanaku's Kalasasaya temple.
Wikimedia Commons
It was the capital of an empire that extended into present-day Peru and Chile, flourishing from 300 to 1000 A.D., and is believed to be one of the most important cities of ancient America.
Andean legends claim the area around Lake Titicaca was the cradle of the first humans on Earth.
According to the myths, Lord Viracocha, the creator of all things, chose Tiahuanaco as the place of creation. It is unknown how old these ruins are, but some researchers suggest that they date to 14,000 years B.C.
Fox News Latino writes that at its height, the Tiwanaku realm covered 600,000 square kilometers (231,000 square miles), and “left a legacy of impressive stone monuments such as Kalasasaya, the semi-underground Templete, sculptures of prominent figures, the Gate of the Sun and ruins of palaces.”

Closeup of carved stone tenon-head embedded in wall of Tiwanaku’s Semi-subterranean Temple.
Wikimedia Commons
Previous excavations at the site have revealed substantial portions of the Akapana Pyramid Mound.
Archaeology’s InteractiveDig writes that in the ancient past there is evidence that the established infrastructure was razed and rebuilt by the inhabitants, and the city was abandoned.
Researchers say there was a sudden shift in 700 A.D. Previous monuments were torn down, and the blocks were used to build the Akapana Pyramid. However, by the time the city was abandoned, the project had still not been completed, and laid unfinished.

The Akapana Pyramid Mound, Tiahuanaco, Bolivia. Franciso Javier Argel/Flickr
Results from the excavations at Tiahuanaco and the research into the newly detected buried pyramid are expected to be announced later this year.


Source: Humans are free
Publicada por Ufomania - The truth is out there à(s) 10:02 AM