Is this 'Bigfoot'? Skateboarder captures mysterious creature on video at US lake 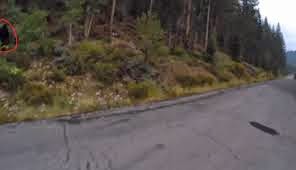 A US skateboarder claims he has filmed a video of the mythical Bigfoot.
YouTube user Couch Potato was skateboarding with friends in lake Tahoe with a head-mounted camera when he captured footage of the creature.
“I didn’t notice the Bigfoot-like creature until I got home several days later and watched my videos,” he said.
The recording, initially consisting of seven minutes of footage but later edited to about a minute, was sent to The Paranormal Review, a YouTube channel “devoted to analysing paranormal activities and breaking them down”.
The video shows a dark silhouette standing between the trees by the left side of the road.
“The dark area in the bush was something that we noticed," said the owner of the channel.
"Couch Potato didn’t say anything about it when he contacted us. I don’t know if it is the supposed creature or not.
"Who knows if it is legitimate or not?"
Lake Tahoe is a freshwater lake located along the border between California and Nevada and is considered the largest alpine lake in North America.
Similar sightings have taken place in the area. In 2012, a man claimed to have filmed “what appears to be a Bigfoot” and recorded “its voice yelling”.

Source: Mirror
Publicada por Ufomania - The truth is out there à(s) 9:37 AM