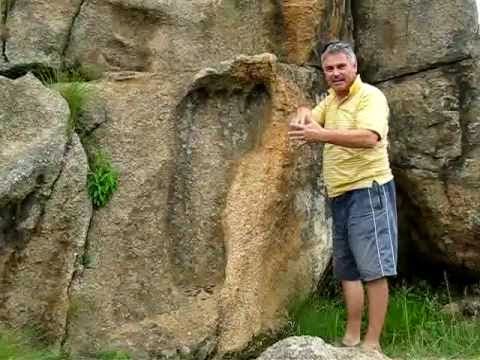 Below is a video of Michael Tellinger showing the world close-up video footage of what appears to be a giant footprint that’s been etched into granite rock in South Africa. This video has been circling the web for a few years now, and despite all of the efforts to debunk it, what you see in the video is actually real. It’s hard to believe (almost impossible) that the granite would take on this shape through simple erosion, and even if you find yourself with a level of skepticism it’s very interesting to say the least.
Who is Michael Tellinger? He is a renowned author/politician who has made several groundbreaking discoveries regarding lost ancient civilizations that once roamed the Earth. His research has more specifically been narrowed down to the southern tip of South Africa. His analytical and scientific approach to his work has attracted many. He’s lectured in various parts of the world and has produced some remarkable evidence that’s forcing us to consider the true origins of humanity and our ancient history. He is now considered an international authority on the origins of humanity and the lost civilizations of southern Africa. You can learn more about Michael and his work by visiting his website here.
Although this footage is a couple of years old, it’s extremely fascinating so we thought we would bring it to the attention of those who have yet to come across it.

Here is another video of him addressing the debunking claims

Diver Finds Evidence of Giant Race of Humans in Arkansas

Magellan’s Strange Encounter With the 10-Foot Giants of Patagonia

ECUADOR GIANTS SHOWN TO THE WORLD

Development on the ‘Lost City of Giants’ in Ecuador

THE ANCIENT GIANTS WHO RULED THE EARTH
Publicada por Ufomania - The truth is out there à(s) 10:32 AM