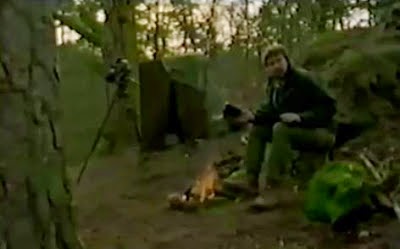 The Honobia Bigfoot Conference and Festival kicked off this weekend and the speakers includ heavy hitters  like Dr. Jeff Meldrum and Ron Morehead. Morehead, the father of the Sierra Sounds audio was at the conference and he gave this explanation to why Bigfoot is so elusive. Here's a snippet from www.muskogeephoenix.com:


Morehead said in his 40 years of interacting with the ape-man, he’s found Bigfoot to be “bigger, stronger, faster and stealthier” than people, which means it easily avoids humans.

His theories explaining Bigfoot’s elusiveness variously involve alien intervention and quantum physics, which he said might explain how the creature can vanish in a blink of an eye.

Morehead's Sierra Sounds recordings are one of the most important evidence supporting the existence of Sasquatch. During the early 1970s, Morehead and his long time friend Al Berry went into the woods of the Sierra Nevada Mountains in eastern California and collected a series of alleged Bigfoot vocalizations that sounded like "samurais" talking. This compilation of vocalizations is now called the "Sierra Sounds" and it has been confirmed by language expert Scott Nelson as Bigfoot language. The list of experts also includes people like, Dr. R. Lynn Kirlin of Wyoming State, Joe Hauser, a biologist. If you haven't heard some of it, listen below: