Meet the Chinese Lumberjack Who Slept With an 10-foot-tall, 6-fingered Alien Woman

"If you can't find me," Meng Zhaoguo said over a cell phone whose signal faded from its isolation, "Just head to the last house on the logging commune lane. Or ask anyone who's around." Everyone knows the first Chinese person to allegedly be abducted by aliens.

With its surging economy, China is summiting once-unseen heights in world rankings: millions of English speakers, almost the most millionaires and actually the least frugal tourists. Yet despite being slightly larger in area than the United States with four times as many people, China trails far behind when it comes to visitors from outer space. To date, only one Chinese person -- lumberjack Meng Zhaoguo -- claims to have slept with one. 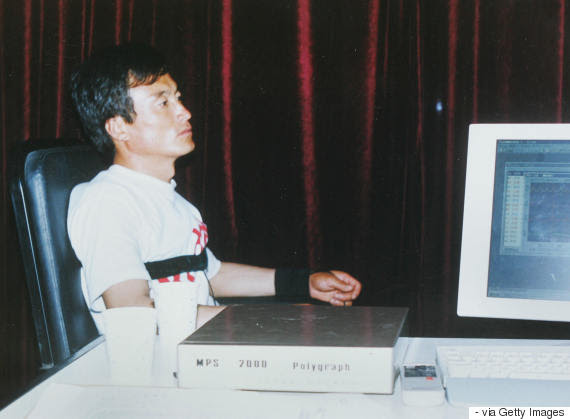 
I first visited Meng at his home on the Red Flag Logging Commune, set among the remains of a forest in China's far northeast, an area historically known as Manchuria. Chinese characterize Northeasterners as big-hearted, industrious and sometimes a bit touched in the head. So it was not a shock when the nation's first person claiming interstellar relations came from here. In 2003, I traveled over a winding, ice-covered, one-lane road through the forest to meet him.

On the commune, Meng lived in a two-room timber frame house he had built with his own hands. Bare yellow light bulbs dropped from the ceiling, and there was no phone -- or cell reception. But a big-screen Sony television filled one end of the room.

"Out here, it only picks up two channels," he said. "So it's a waste of money, but I didn't buy it. A businessman brought it, after he heard about my story." Another visitor, from Malaysia, had brought him a cow. "I sold that," Meng told me. "Cows cost money to take care of. What am I going to do with a cow out here?"

We stepped outside, boots crunching snow, and faced the Dragon Mountains, veiled in purple mist as the day's light faded. Meng said that on a night much like this in 1994, he saw a metallic glint shimmer off those peaks.

"I thought a helicopter had crashed, so I set out to scavenge for scrap." He made it to the lip of a valley, spying the wreckage in the distance, when "Foom! Something hit me square in the forehead and knocked me out."

He awoke at home, he told me, with no memory of how he got there. A few nights later he woke to find himself floating above his bed. As his wife slumbered beneath him, a 10-foot-tall, 6-fingered alien woman with thighs coated in braided hair straddled his waist. Meng and the alien copulated for 40 minutes.

"She then disappeared through the wall and I floated back down to bed. She left me with this." He undid his trousers to reveal a two-inch-long jagged mark that he insisted bore only a coincidental resemblance to a scar resulting from a slipped stroke of a saw.
I asked him to draw the creature, and he took my pen and tore off a sheet from a roll of rough, unbleached paper. To my surprise, I recognized the alien. As he made tiny x's on the alien's inner thighs, I realized Meng was sketching a hairy cousin of the Michelin Man. His smiling, puffy white face waved from atop an auto repair shop at the base of Red Flag Logging Commune. I thought of that, and the empty crates of Five Star beer stacked just outside Meng's front door, and the remote loneliness of a Northeast winter.

But Meng told the story calmly, not in a desperate or pleading tone, cajoling the listener to believe. I kept my deductions internal, and he suggested we go outside with his kids and light the fireworks I had brought for them. That night I slept fitfully on Meng's bed, while he took the couch.

Publicada por Ufomania - The truth is out there à(s) 6:14 PM