If Mars once had life, what happened to it? 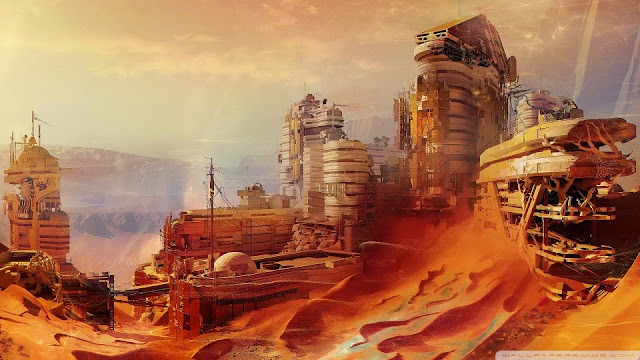 After studying the red planet for decades, scientists admit that there is a great possibility that an impact of a asteroid or comet altered the faith of the Red Planet, compared to Earth, Mars is full of impact craters but that isn't that strange since Mars has a very uncomfortable position in our solar System, right next to the Asteroid belt. due to this, Mars is constantly being bombarded by asteroids, unlike Earth Mars does not have a bigger moon to shield it against incoming asteroids.
Looking back in history we know that the Earth has been impacted in the past by large space rock and some of those impacts have possibly changed the history of our planet. One of the best examples we know of, is the Chicxulub impact crater located in the Yucatan peninsula in Mexico (see image above) which some scientists believe to have been the number one reason for the extinction of the Dinosaurs.
So if this happened here on Earth, would something similar be possible on Mars? On the red planet we find a very interesting impact crater located in the Lyot region, and it is approx. 125 miles in diameter. The area of this impact crater tells us just how powerful the impact was and it could have been one of the main causes why Mars today is just a “desert”. This comet strike may have caused a profound disruption to Mars’ planetary system. It would have been an  absolutely devastating planet climate-changing event. So is it possible that long before losing its atmosphere, Mars sustained life? Even civilizations that once called the red planet “home”? If so, where did the Martian’s go? did they survive? Did they escape before these cataclysmic events? And is Mars connected in any way to Earth? These are just some of the questions that desperately want to be answered.
On July 20, 1976 after a ten-month journey from Earth, Viking I reached its destination, the red planet. The images that Viking I sent back to Earth were amazing, and some of them showed that Mars was not that different from Earth. Some regions on Mars resemble places on Earth, like the Death Valley. Where the story about Viking I gets interesting is after it performed several tests in search for life on the red planet. Viking I returned controversial results.  Dr. Gil Levin designed one of the tests that the Viking probe performed, a relatively “simple” test. He explained that Microorganisms breathe just like you or I or anything else, and then they give off carbon dioxide. What NASA did is, they took a small sample of Martian soil, placed it inside a small container and this container was monitored for a week for signs of “bubbles” inside of the tube, and after seven days, the unexpected happened. The test for life on Mars was positive by criteria accepted by NASA as “bubbles” were registered inside the Viking I container. While this test returned positive for life, other tests with different criteria came up negative. NASA were very cautious in this matter and opted to say: “There is no proof of life on Mars“.

Some scientists suggest that Mars may have had an atmosphere similar to Earth’s atmosphere, and it got annihilated about 65 million years ago. Adding to this suggestion, ideas have formed in the past which tell the possibility that the civilization that once inhabited Mars, fled to Earth in search for refugee. So does this make us the “Martians” we have desperately tried to find?  Some scientists say they've found powerful evidence of lost civilizations on the red planet and in fact, they believe they may have discovered a nuclear signature in the Martian atmosphere that matches Earth’s after a nuclear test. According to scientists there are very large traces of Xenon-129 on Mars and the only process that we know that produces Xenon-129 is a nuclear explosion. Is this just another coincidence that shows how similar Mars is to Earth? Or does it provide evidence that Mars was very different in the past?

Publicada por Ufomania - The truth is out there à(s) 6:10 PM