Did a highly advanced ancient society once exist globally? 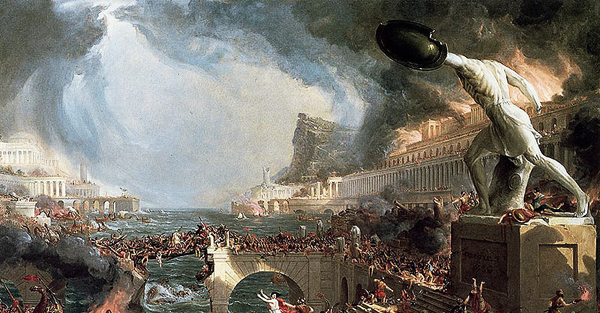 One such place is Puma Punku, Bolivia. High in the Andes mountains close to the shores of Lake Titicaca, the ruins of this once beautiful structure lies strewn across the countryside, destroyed from some unknown cataclysmic event. No evidence of a written language can be found amongst the ruins, and archeologists cannot identify the original purpose for this structure.

The stones found at this site are mainly andesite, which is very hard with a high concentration of quartz. Today, we would have to use diamond-tipped, high-speed tools in order to recreate these kind of cuts. The cost for us today would be prohibitive because of the amount of time for all these inside cuts.

How could they have created such an elaborate and intricately detailed structure without a written language? Most people in the construction business understands that a structure does not come together by accident. The more detailed the building, the more complex and detailed the plans. So, where are the plans to create Puma Punku, much less the Great Pyramid of Giza? 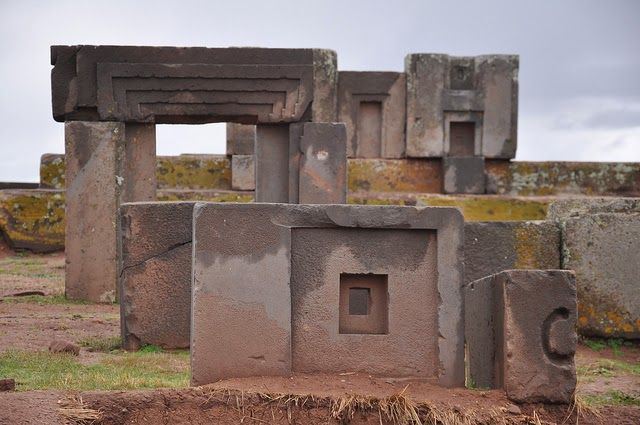 In spite of locations like Puma Punku, historians still insist that the cradle of humanity is in current day Iraq, once known as the land of Sumer. Ancient Sumerian texts tell a number of stories that appear very similar to passages in the Torah or Holy Bible. These Sumarian clay tablets are much older than the oldest known copies of the Torah, leading many agnostics to believe that mean the Hebrews and Christians incorporated these stories into their own scriptures. I don’t believe so. I believe that the original scriptures from the God of Israel simply have yet to be found. How many times in our past have the certainties that we understood be proven absolutely wrong? Is the Earth flat? No. Is the Earth the center of the universe and everything orbits around us? Again, no. So the search continues. Maybe the answers are all around us and we just don’t recognize it?

Historians have a general idea based on archeological finds on many of our ancestors back to about 4,000 years. However, they do not have a very complete picture of how they did things. Historians understanding of ancient technology has huge holes in it. The very thought that ancient Egyptians could have cut granite with copper chisels is laughable at best. I liken it to using a plastic knife to cut down a giant California redwood tree. What’s more, our understanding greatly diminishes as we go further back in time.

Moving from Sumer to the Giza plateau, we once again come across the Great Pyramid, aligned along the 31st Longitude line, and perfectly squared off with the four cardinal points of a compass that had not been created at the time the structure was built. Many people will immediately say “It was the aliens” without considering the fact that just maybe our HUMAN ancestors were far more advanced than we thought. The proof is all around us, but we must put our arrogance aside in order to accept that. But what’s more amazing is what else can be found on the 31st longitude line.

Deep in South Africa there are many sites made of stones with such a high quartz content that they are called bell stones. In the link below, Michael Tellinger demonstrates some that he has found:


One such site found on the 31st longitude line made of these bell stones is Adam’s Calendar. There are strange issues with GPS coordinates and cell phone connectivity inside the circle of stones. What energy forces are at work here? I have found no convincing proof just how old Adam’s calendar is, but some have said it is many thousands of years old… much older than historians believe that mankind has been on Earth. Some have said as far back as 75,000 years. 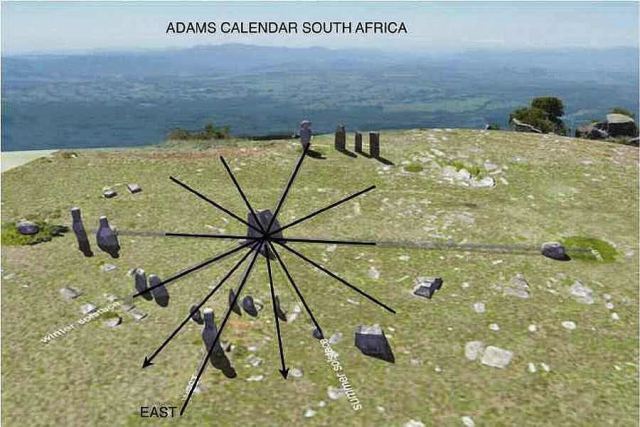 Here we must take caution. I like to think of timelines as practically useless whether for trying to predict the future based on prophetic writings, or to try and establish a timeline of the past. It always seems to make people look foolish when proven wrong, which happens frequently. For those who have faith and believe in God, why would you dare to try and place human constraints on an all powerful God who lives outside of time as we know it? I accept that things will happen in the time they are intended, and the past happened sometime prior to yesterday. I can accept that, and don’t care one way or another if it was 12,000 or 150,000 years ago.

But one thing is undeniable: the flood of Noah’s time is a widely accepted fact. So little is known about that time prior to the flood, both in the Bible and historically. But archeologically we can see evidence of a thriving society that once existed in the most surprising location: South Africa.

The picture below is accepted by main stream historians to be cattle “kraals” or pens used by the hunter gatherers that inhabited the area thousands of years ago in limited numbers. Most historians believe there were only 10,000 or so inhabitants, firmly discounting any thoughts that a thriving society once lived here. However, the ruins just don’t make sense with the narrative. First, there is no entrance to these pens. So how would you get the cattle in and out? Second, the walls range anywhere from 8 feet to 12 feet in height, though many appear now to be filled in with large amounts of sediment. Sounds like a massive flood to me. Lastly, there are thousands upon thousands of these ruins. There are also miles of terraces created on the mountainsides, assumably to plant crops. That’s lots of food capabilities for a few thousand people sparsely spread across the countryside. 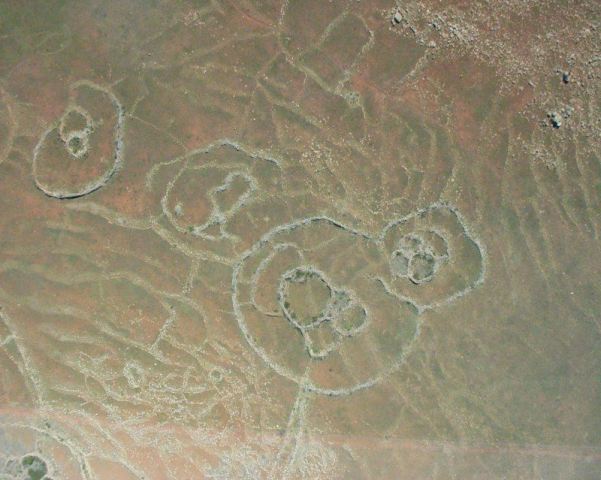 Looking at the picture above, you can see the connecting lines of stones that branch out like a network. What is going on here? Why was it built and by who? It certainly does not make sense to be pens for livestock. There is nothing close to this today, but then again we have not really studied sound technology, have we? These kraals are also made of the bell stones that I talked about earlier. It is well known that quartz crystals has many properties. They can be used to store large amounts of data, and rocks with a high quartz content will also ring like a bell, and reverberate to outside sounds.

If you have a perfectly tuned guitar, when you strike the low E string, the high E string will reverberate on it’s own. So what effect would sound have on some of these ancient sites? This should be humanity’s next greatest endeavor is to discover how our ancestors harnessed sound, and its effect on these ancient locations. We have examples all over the internet of researchers using sound to levitate small items like ping pong balls. If you could harness massive amounts of sound energy could you levitate some of the massive stones used to build the pyramids? I believe if you controlled the frequency and provided enough amplitude you could indeed levitate stone. You have to wonder if Nikola Tesla and Edward Leedskalnin rediscovered ancient technologies.

The link below is to a presentation by Michael Tellinger on sound energy. The video is over an hour long, but if you forward to the last 15-20 minutes he shows a great many sites and shares the “Ah-Ha” moment how our ancestors built the public structures to channel sound to create energy, and today’s modern equivalent: computer circuit boards.


So what is the one thing that ties in all these locations? Stone structures built using massive stones with a high quartz content. They are found in Egypt, South Africa, South and Central America, China, India, Pakistan, Bosnia, France, Great Britain, Turkey, and even on remote Easter Island. Additionally, pyramid structures have been found on nearly every continent. How much more evidence do you need that a highly advanced society once existed on a global scale that would rival any of today’s? I’ve really only scratched the surface of this. Go do some digging for yourself … this will keep you up at night!

So where are the plans to build all these structures? How do we know they are not saved electronically in the very stone that was used to construct them? I wonder what other wonders we would find there? I would love to see the hackers all over the world spend their time on this, rather than the destructive things they do today. If you REALLY want to change the world, think how things would certainly change if you discovered free, limitless and wireless energy and GAVE it away. Wouldn’t this wreak havoc with the big energy corporations? How much easier would your life be if you didn’t have to pay for electricity for your home or fuel for your vehicles?

Read also:  The Remains of a 200,000-Year-Old Advanced Civilization Found in Africa

Publicada por Ufomania - The truth is out there à(s) 5:51 PM