SECOND ESPECIE CONEHEADS RULE THE WORLD FINANCIALLY FROM THE VATICAN 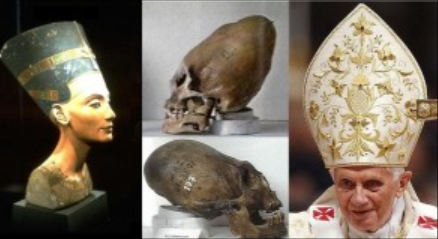 Credible scientists support eye-witness accounts that Homo Capensis, whose thousands of skulls litter the Earth’s surface, are still with us. Dr. Ed Spencer, a Yale medical school trained neurologist, is foremost among them.” The Capensis drew maps from the last ice age for us Homo Sapiens. They have bigger brains than we but “they’re not extraterrestrial,” says Hudes. 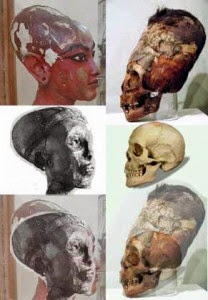 She reports Coneheads made maps in the previous ice age. We find “Remnants of their civilizations are all over the planet, often submerged–sea level has gone up 400 meters. They are very distinct from homo sapiens. “Their DNA is so different that if the two species mated, their offspring would be infertile. We know this because their DNA was tested.” We find their skulls all over the place because they have been on Earth with us, but after the ice age there weren’t many of them. And so they hide. One of the places they have been hiding is in the Vatican.” NO HATS OFF FOR VATICAN TOP BRASS To hide the Coneheads among them, Hudes says,Vatican chiefs wear miters–tall, cone-shaped hats to hide their cones. Homo Capensis divide, conquer and control us with the money system and religion. They program us to hate and kill each other off. They’ve “used us like cattle throughout our history.” Hear Janet Kira and Dr. Sasha Lessin interview Karen Hudes and Dr. Ed Spencer, to be shared on www.aquarianradio.com the first week in April, 2014.