A second mystery around the disappearance of Flight MH370 has largely gone unnoticed: why hasn’t the United States been in the forefront of providing information about it? The implications of this question are massive.
America has a fleet of the most sophisticated spy satellites, called “keyhole” satellites, covering the earth’s surface daily with imaging systems comparable to those of the Hubble Space Telescope, but instead of data from any of these, we read of data from China and France. One can understand that the CIA does not want others to understand fully the capabilities of its satellites, but surely the lives of more than two hundred people are cause for some information, however indirectly supplied.

Then again, the American military has some of most sophisticated radars on earth, and there is, without a doubt, an installation of the highest capability at the secret base on Diego Garcia in the Indian Ocean. How could there not be? But we have read of no data from them, only from others less capable of telling us what happened.
Could it be that the United States shot down Flight MH370, either accidentally or deliberately, and now wants to keep it secret? The possibility of recovery of the full wreckage, even if its location were found, from 4 miles under the sea amongst underwater mountains is extremely remote at best, so the United States can remain confident that physical evidence will never emerge.
There would be nothing unprecedented in such an act: on at least 3 occasions, regrettably, America’s military has shot down civilian airliners, only admitting eventually to the one they could not hide. They are also indirectly responsible for a fourth.

Iran Air Flight 655 was stupidly shot down in 1988 by the USS Vincennes in Iranian waters during the Iraq-Iran War, not only killing 290 people including 66 children, but there was a long period afterwards in which the U.S. admitted no wrong-doing, offered no apology, and no compensation to its victims (only 8 years later was a quiet settlement made).
It was a quite vicious set of circumstances and the injustice of it led unquestionably to the motive for bombing Pan Am Flight 103, killing 259 people and 11 on the ground, later the same year by people still unknown.
TWA Flight 800 over the East Coast of the United States was certainly the victim of a shipboard American anti-aircraft missile accidentally released. The evidence included radar tracks and eye witnesses. But the U.S., instead of admitting its horrible error and compensating victims, conducted a long and almost farcical investigation headed up by the same FBI that gave us the farcical investigation into the Kennedy assassination.
Last, the fourth hijacked plane on 9/11, United Flight 93, of “Let’s roll” pop legend, which crashed over Pennsylvania was almost certainly shot down by an air-to-air missile from a fighter plane. A plane was seen bywitnesses, the distribution of the wreckage tends to support a shoot-down, and just the sheer impossibility of America’s hundreds of billions of dollars in air defences staying asleep at the switch for a fourth event the same day argue powerfully for an attack.
I have no idea what event (a rogue pilot, a hijacker?) led to Flight MH370 turning off its communications, changing course, and flying low, but I do know that the event could not have gone unnoticed by America’s military-intelligence eyes and ears, especially when its new course showed any possibility of Diego Garcia as a destination, a place which is top secret and from which America forcibly removed the locals when it leased it from Britain.
It will likely remain one more “riddle, wrapped in a mystery, inside an enigma,” as Winston Churchill once described the Soviet Union, an expression now entirely suitable to a great many of the activities of the United States. 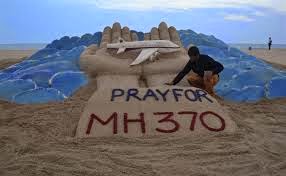 Source: EU Times
Publicada por Ufomania - The truth is out there à(s) 9:47 PM