For centuries, Hollow Earth conspiracy theorists have tried to prove that there’s a whole other world beneath our own. But first they need to find the way in... 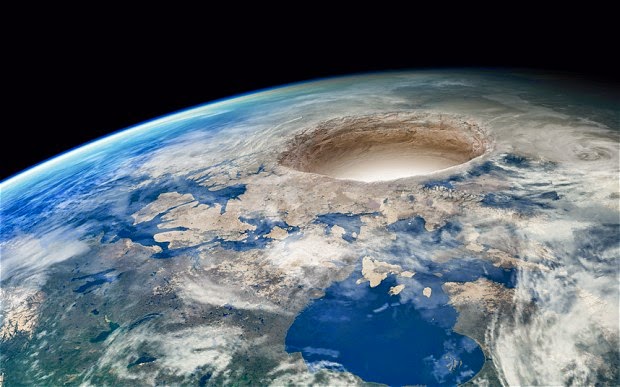 Late at night, on October 4 2002, a strange guest appeared on a cult American radio show. Coast to Coast AM with Art Bell had a reputation for exploring weird themes with fascinating guests, but few had ever sounded as excited as this one.

Dallas Thompson was a former personal trainer who had spent his youth in Hawaii but now lived in Bakersfield, California. His life had changed forever following a terrible accident, five years earlier. He’d been driving along Highway 58 during heavy rain when his car had aquaplaned, spinning four times, only to plunge backwards down a 250ft drop.
When Thompson was found, the roof of his blue Honda Accord had been crushed almost to the floor. The fireman who rescued him was amazed he hadn’t been decapitated. As he’d been sitting, helpless, in the wreck, Thompson had had a vivid near-death experience. He claimed to have seen a “light so bright that it burnt my eyes” and made him “legally blind” and to have had bizarre knowledge about the world poured into him. When he regained consciousness, he was convinced that the Earth was hollow and had an opening at the North Pole. He’d come on Coast to Coast to discuss his mission to locate and explore it.

“There are cavern systems and caves that traverse the whole mantle,” he told Bell, whose scepticism often took the form of slightly extended silences. Because of the special atmosphere in the hole, Thompson explained, living creatures were protected from pollutants and harmful rays. There were herds of mammoth and ancient tribes down there, the members of which lived to be around 1,700 years old.
“How do you know all this?” asked Bell.
“I just do,” said Thompson. “I remembered stuff that has been forgotten.”
Later, Bell asked after his mental health.
“Are you manic?”
“I’m just excited,” said Thompson.
“… I can tell.”
Perhaps most incredibly, Thompson revealed he’d secured funding to travel to the hole with a helicopter backpack called a SoloTrek, which he’d use to descend into it. He even had a date for the trip: May 24 2003.
Over the next few months, news of Thompson’s expedition spread. He began to receive emails from media companies keen to report the story and many more from both critics and admirers. The sprawling book he’d written, which included his theories about Hollow Earth, began to sell.
In December 2002, two months after his radio appearance, he posted a message on his Yahoo Group page describing an inundation of “over 5,600 emails every few days”. He said his book, Cosmic Manuscript, had become a bestseller but he was pulling it from sale. “I have requested the book be discontinued even though it’s still at the top of the charts in Canada,” he wrote.
And then, the most mysterious event of all took place. All of a sudden, Thompson disappeared…
For many centuries, humankind has dreamt of inner worlds. Numerous writers have been inspired by the idea, not least Tarzan creator Edgar Rice Burroughs (At the Earth’s Core, 1914), Edgar Allen Poe (The Narrative of Arthur Gordon Pym of Nantucket, 1838) and, most famously, Jules Verne, whose 1864 novel A Journey to the Centre of the Earth has been adapted numerous times for both stage and screen.
Thousands of contemporary theorists discuss what is commonly referred to as “the greatest ever secret” on internet forums. On YouTube, videos claim that the satellite images on Google Earth have been altered to cover up the existence of the holes, while other videos claim the holes are there for all to see. 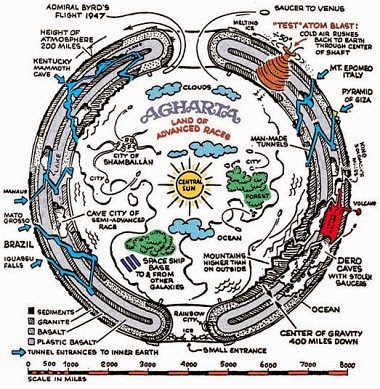 Publicada por Ufomania - The truth is out there à(s) 7:09 PM