Spirit Rover took a sequence of five images over an approximate seven day period that showed what appears to be an animal near a distinctive set of rocks. Two of the five images show an object that appears where other images in the sequence show nothing else was previously there. The object, about the same size as a basketball, had clearly moved, not once but several times in the sequence. The object appears to have a relatively long neck and blends in well with the surrounding rocks. Spirit Rover had captured images of an indigenous form of Martian life that blends in well with the surrounding rocks.

It’s pretty hard to ignore NASA’s own imagery that clearly shows a basketball sized object appearing to move on the Martian surface. So why hasn’t NASA said anything about it? I thought I would give someone from NASA a chance to respond.

The five images from the Spirit Rover mission show an object that has clearly moved in the sequence. The object appears to be some kind of animal that blends in well with the surrounding rock. Given that NASA experts refuse to discuss such a  Hard evidence has been found that there is some kind of indigenous life roaming the surface of Mars.
Source: http://www.cosmostv.org/ 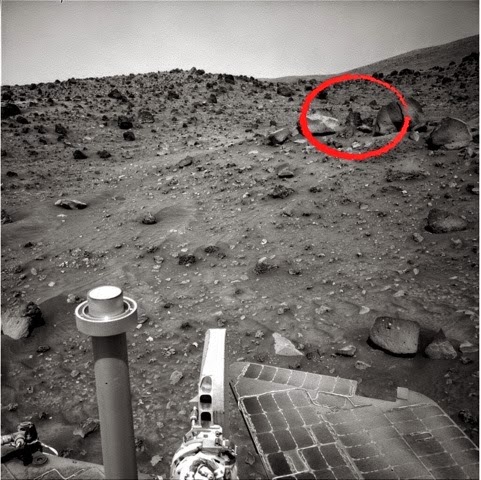