What Is The Vatican Hiding In Its Archives?

No-one can enter without the express permission of the Vatican - and when they do get in, they can't even browse the shelves. Not even the Pope has access to his own archive. So what exactly is the Vatican hiding down there?

Here, bound in cream vellum, are thousands upon thousands of volumes, some more than a foot thick.
This is the Vatican secret archive, possibly the most mysterious collection of documents in the world.
Here you can find accounts of the trial of the Knights Templar held at Chinon in August 1308; a threatening note from 1246 in which Ghengis Khan’s grandson demands that Pope Innocent IV travel to Asia to ‘pay service and homage; a letter from Lucretia Borgia to Pope Alexander VI; Papal Bulls excommunicating Martin Luther; correspondence between the Court of Henry VIII and Clement VII; and an exchange of letters between Michelangelo and Paul III.
There are also letters from Elizabeth I, Mary Queen of Scots, St Bernadette, Voltaire and Abraham Lincoln.
And here too – depending on how much faith you have in the novels of Dan Brown – lies proof that Jesus married Mary Magdalene and continued their own earthly line. 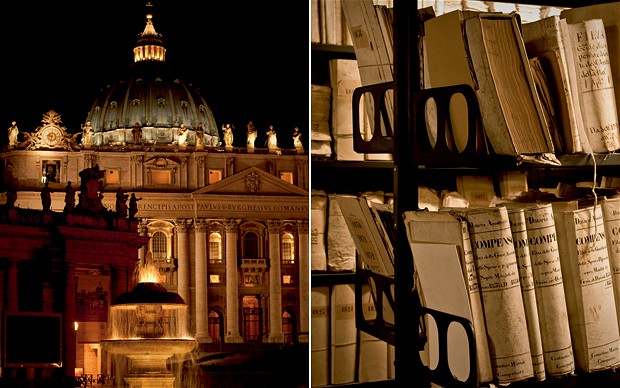 Publicada por Ufomania - The truth is out there à(s) 6:02 PM