Is this a ghost? Hospital worker takes Snapchat picture of 'dead girl' outside children's ward 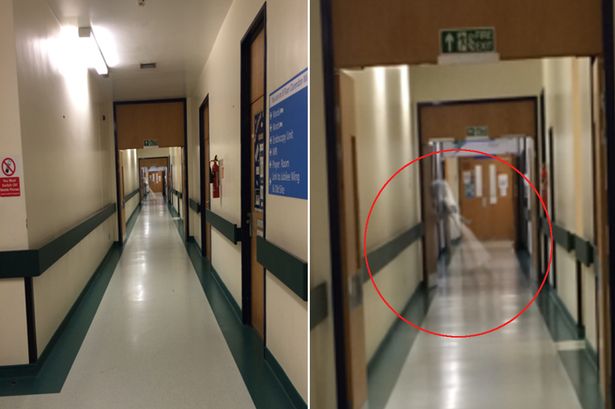 A hospital worker says he took this spooky picture of what appears to be a ghostly figure near a children's ward.
Andrew Milburn was texting his girlfriend at Leeds General Infirmary on Friday night just before starting his night shift.
The 21-year-old sent her a Snapchat image of a corridor on the hospital's Clarendon Wing - but says he had no idea the picture appeared to show this ghostly looking figure.

Andrew told  "I sent her a picture as I walked to my office. Unbeknown at the time it appears that I captured a ghost figure in the corridors.
"I have since put this picture on Facebook, it has received thousands of likes and comments and has been shared as far as America.
"It has also been shared on to paranormal investigator groups, many of which believe the picture is real."

Andrew, who has recently returned to work after a career break, says the room the ghostly figure appears to be walking into is where the switchboard works.
He said a number of colleagues at the hospital have heard footsteps at the spot when no-one is there.
"There have been a few odd things," he said. "Now people are a bit scared, and apprehensive about going to the loo."

A number of people on Facebook claimed the image had been photoshopped, something Andrew denies.
"I didn't used to believe in ghosts," he told the Mirror. "I was always a skeptic."
Others claim the image may have been created using an app called Ghost Capture, which allows users to place a pre-existing ghost image into their own photographs.