The Cornwall UFO Triangle - county has most sightings in UK .

The truth is out there – and it’s apparently in Cornwall.
Researchers into the paranormal claim a Cornwall UFO Triangle exists in the county. 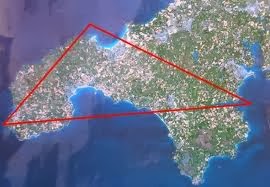 The triangle shows the area that has the most reported UFO and paranormal activity, according to the Cornwall UFO Research Group.


Cornwall has the highest number of sightings of UFOs in the country according to the latest research.
Lionel Fanthorpe from the Cornwall UFO Research Group said: “It’s extremely difficult – nearly impossible – to obtain rigorously balanced, objective data for paranormal and anomalous events.”
Mr Fanthorpe said calculations were based on first-hand experiences, on-site investigations, case studies and discussions with other researchers.
He said: “When the many different types of reported psychic, paranormal and anomalous phenomena are brought together and given the same statistical weighting, three localities seem to stand out: Cornwall, Norfolk and an area bounded by Harrogate, Leeds and York.”
The figures show more than 60 reported sightings of UFOs in Cornwall compared to a national average of 40 sightings for comparable areas.


Source: Cornwall
Publicada por Ufomania - The truth is out there à(s) 11:11 AM