A Deeper Look Into the UFOs Over Popocatépetl Volcano, Mexico.

Mexico, there have been sightings of unusual objects flying into and around an active volcano named Popocatépetl, which is the Aztec word for "Smoking Mountain". There were numerous explosions that produced ash clouds on Oct. 25, the same day of the UFO event, reports Open Minds TV.  Among the sightings, there is one that captured popular attention. A brightly illuminated, cigar-shaped object was filmed by the Mexican media company Televisa.

According to International Business Times, Televisa caught the alleged UFO image on a fixed camera that is used to monitor the volcano's daily activity, located about 40 miles south of Mexico City.

Popocatepetl volcano area is known for UFO sightings and this video of a clear, cylindrical and elongated UFO comes right on the heels of a very similar Kentucky UFO sighting. There is, however, some questioning surrounding the authenticity of this particular Popocatepetl footage and I feel we are responsible for doing our due diligence in ruling out all possible forgeries.


"There's a tendency to quickly sign off on the video's legitimacy. The problem is that, at this moment, we don't have an exact pedigree detailing the video's original source and the hands through which it has passed," said former FBI Special Agent Ben Hansen.

"It seems fairly obvious that the audio of the rumbling volcano accompanying the news story was dubbed in," Hansen, the lead investigator of the Syfy Channel's "Fact or Faked: Paranormal Files" series, told The Huffington Post in an email.

But despite the suspicion raised regarding the cylindrical UFO footage, Popocatepetl has quite a history of strange activity, another UFO was captured by a news camera early Thursday, November 8th

By the mere definition of the term UFO, we can indeed conclude these are unidentified flying objects. But this begs an even grander question, what makes Popocatepetl volcano a hotspot for this activity? There is a staggering amount of evidence and eye witness accounts telling us that our skies are populated with strange activity that defies conventional understanding and if these sightings are authentic, why this volcano? Below are some postulations I have gathered that I feel deserve our attention. You will also find a list of sources I referencedso you can further your own investigation and reach your own conclusions.

Sun Gods, Sun Spots and the Great Singularity
Many ancient traditions talk about the sun as being the doorway to the higher realm where the sun gods came from.  They talk about the black hole in the center of our galaxy as the hub, the central sun from which you can access all of the stars in the galaxy.The Sun Gods must have been "Sun Gods" for a reason. They were called "Sun Gods" in all ancient civilisations: Egyptian, Mayan, Chinese, and so on. The reason that they were called "Sun Gods" was that they used stars as gateways to go from one side of the galaxy to the other. That is why, for instance, the ancient traditions in most of these countries talk about the sun as the "doorway" to the higher places where The Sun Gods come from. So you would enter the sun and then, through to the galactic center, out one of the arms of the galaxy, out one of the sun in another arm of the galaxy

Sunspots appear where the sun becomes very active, usually at the 19.47 degree latitude. Nassim Harameindiscovered, contrary to prior opinion, that sun spots reflect fire being sucked into a collapsing black hole while emitting steam (H2O).  Nassim also noted that multiple sun spots always occur in opposite polarity.  When you have a vortex going one way in the Coriolis Effect you have another going on at another point on the opposite side.  They generate a link at the middle and that link is the singularity. Sun spots are huge vortices going toward singularity at the center of the black hole.  That’s why you see fire being sucked in.  What’s being shot out? Water (steam)!

Popocatepetl volcano is approximately located at 19.47 degrees latitude"Sun spots" of the Earth

If you were a society that had ships at the size of the earth, you would not be able to go into a small black hole like the earth. Your ship would be too big for that planet. So you go for the next fractal level of black holes. You would go for the sun. But if you were using a smaller ship and you want to go through the black hole of the earth, then you would find that black hole by going through the "sun spots" of the earth. These "sun spots" would be the volcanoes that you find on earth. The volcanoes might not be what we think they are. The most active volcanoes on earth are at 19.47 latitude. Most volcanoes have a large amount of UFO activity. The volcanoes at 19.47 latitude in Mexico have so much UFO activity, that the Mexican government has started to train pilots so that they know where the UFO activity is and be able to avoid them when they are approaching Mexico City for landing. Also Mexicans tipically sit on their porch at night and look at the UFO's coming in and out of the volcanoes. 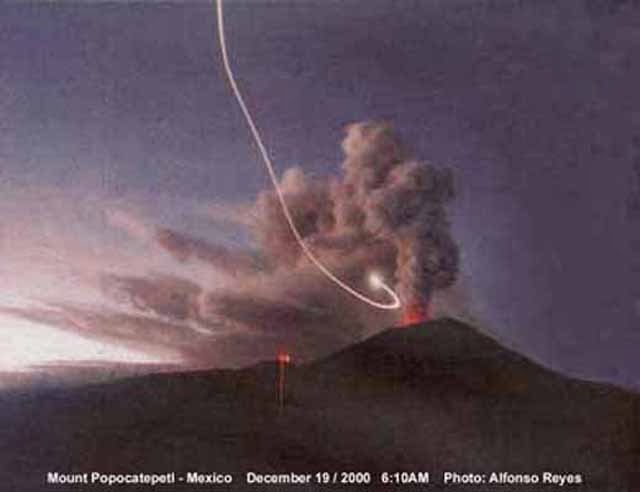 
"Today the main headlines of local newspapers Milenio and Extramex present a photograph of an unknown luminous flying object over the erupting volcano Popocatepetl located near from Mexico City and Puebla. The spectacular photograph taken by reporter Alfonso Reyes last tuesday 19 at 6:10 AM while making a report of the gigant violent awakening present a bright luminous object that contrast with the black clouds of smoke emanated from the volcano crater. The photo was taken in a 20 seconds exposure time and a 24 mm angular lens according to Mr. Reyes testimony." 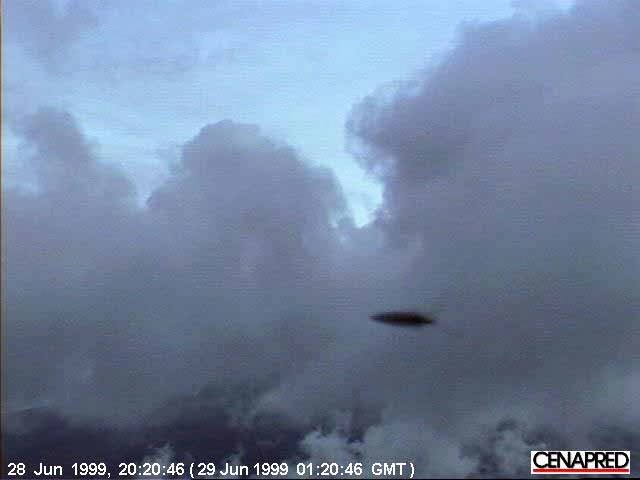 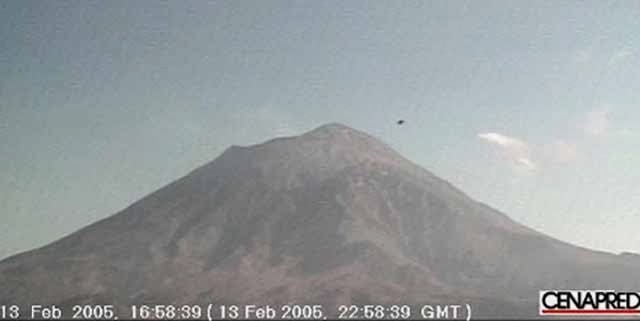 "Dozens of witnesses have recorded sightings on video and photographs of UFOs going in and out of - or circling Mt. Popocatepetl often before an eruption. Mexico takes us to myths about 2012 - as an end time date and the return of Quetzalcoatl, the feathered serpent God. One legend has it that he lives beneath the volcano in a subterranean city. Another says that he flew off in a spaceship saying he will return one day. That goes with the 'returning god hypothesis', at the end of time."

The Planetary Merkaba and Hyperdimensional Physics 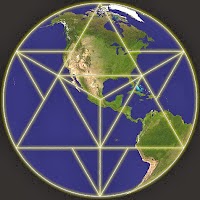 Why is the storm known as the Great Red Spot on Jupiter appearing at 19.5 degrees and never goes away?  Why is the largest volcano on Mars, Olympus Mons, at 19.5 degrees latitude?  Could it be the same reason Hawaii is also at 19.5 degrees latitude on Earth?  Why does Jupiter emit more energy than it receives from the Sun?  All these events may be explained by Richard Hoagland’s theory of Hyperdimensional Physics (HD).
The effects of Hyperdimensional Physics become prevalent when a body is a state of rotation.  Let me emphasize: rotation, rotation, rotation.  According to the hyperdimensional model, as a sphere rotates the hyperdimensionalproperties can be seen as a tetrahedron, the simplest 3D shape, circumscribed within the sphere.  If the point of one tetrahedron is at the pole of the sphere the other points would intersect at approx. 19.47 or 19.5 degrees latitude.  After Hoagland had done extensive analysis of the Cydonia region of Mars where the infamous “face” was discovered, he found that 19.5 had been memorialized everywhere or like in the novel Contact, a message may have been given to us, in the form of mathematical equations. The area we shall be focusing upon is between 19-20° North and 98-100° West.  Within it we find Tenochtitlanwhich once existed exactly on the 19.5° latitude, and nearby it are Teotihuacan as well as the Popocatepetl andIztacihuatl volcano's.  It is the exact placement of their Pyramid centers nearby to these volcano's that is worth our attention. 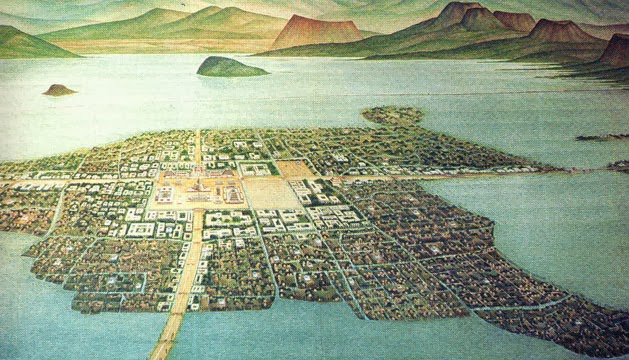 Here is why: The Star Tetrahedron

This geometrical shape is made up of 2 interlocking Tetrahedrons
A Tetrahedron is 1 of 5 perfect solids (the platonic solids).  When a Star Tetrahedron is placed inside the Earth and 2 of its points aligned to the N. and S. poles, the remaining 6 (3 North and 3 South) points touch the surface of the Earth at 19.5° North and South of the Equator.

When 1 of the 19.5° N. points of the Star Tetrahedron is aligned to Tenochtitlan, the remaining 5 points all pin point strong volcanic activity, either as Volcano Islands, a Desert Volcano, or an Underwater Volcano. 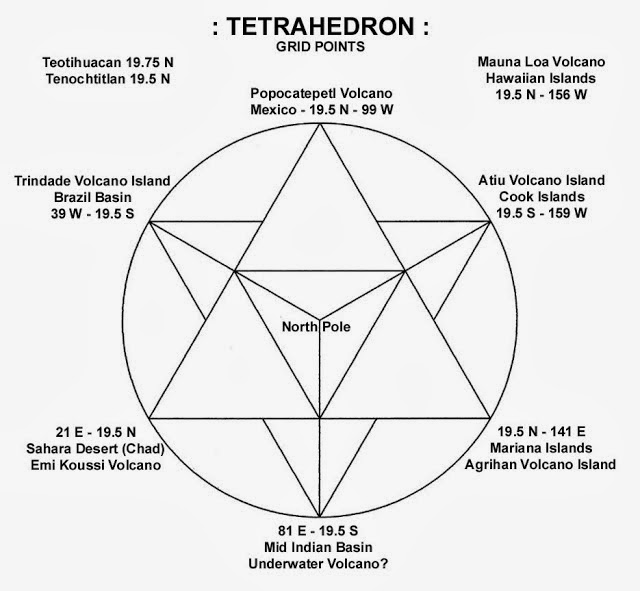 You can view a live camera feed of Popocatépetl Volcano here:http://www.cenapred.unam.mx/popo/UltimaImagenVolcanI.html