A mystery 'storm cloud' caught on weather radar after erupting off a U.S. military missile testing ground in New Mexico has left weather experts baffled.
Conspiracy theorists have speculated that the plume-like cloud, which seems to appear out of nowhere, could have been kicked up by the explosion from an unreported weapons test.
Deepening the mystery, U.S. National Weather Service offices in Albuquerque and El Paso have confirmed the reading, but say they have no idea where it could have come from. 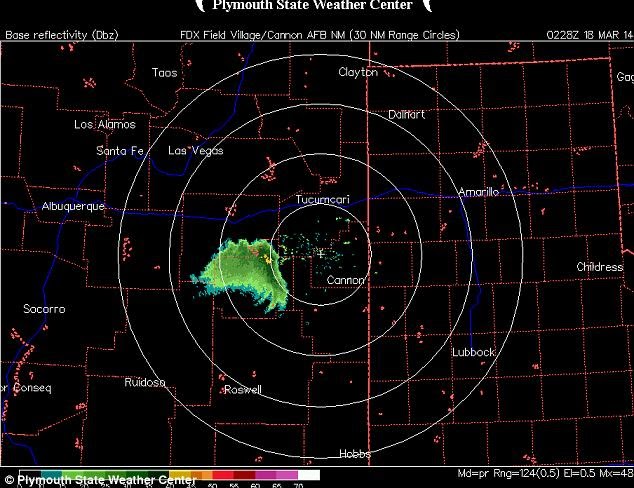 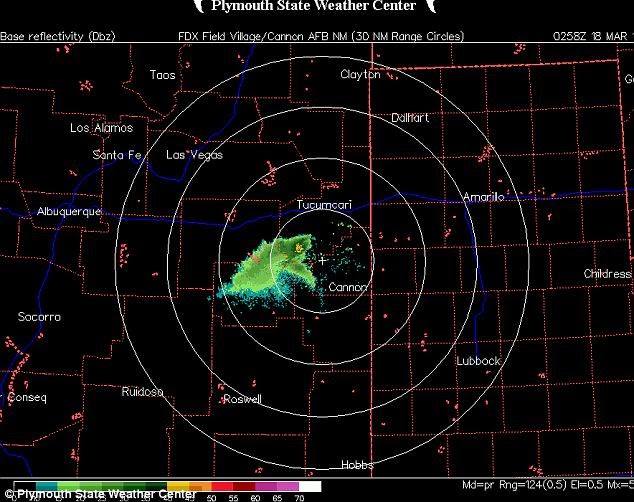 The plume first appeared at sunset on Monday evening over the part of the vast White Sands Missile Range in east Socorro county, close to the 'Trinity Site' where the first atomic bomb was detonated in 1945.
It was spotted in publicly accessible radar data by a blogger, who tracked its progress and has published his findings in two YouTube videos and a blog post.

He showed how the Weather Channel's storm identification system had detected the plume as a strong storm cell which seemingly emerged out of nowhere on a clear night.
A second view of the plume, on the College of DuPage's NeXt Generation Weather Lab service, showed how it appeared to burst out of a small point, like the aftermath of a massive explosion.
The plume was tracked north-east, over Cannon Air Force Base near Clovis, home of the 27th Special Operations Group, over Amarillo in north Texas and towards the Oklahoma border, where it appeared to dissipate.
A closer look at the whereabouts of the beginning of the apparent weather event showed that it emerged from the White Sands Missile Range, a site which extends to some 3,200 sq/miles across New Mexico that is used as a proving ground for the U.S. military's ballistic missiles.

In its previous incarnation as the Alamogordo Bombing and Gunnery Range, the site played host to the 'Trinity' test of the world's first atomic bomb on July 16, 1945.
In that test scientists from the Manhattan Project exploded a 20 kiloton plutonium bomb of the same kind as the Fat Man device that was a month later dropped on the Japanese city of Nagasaki, killing 40,000 people instantly.
There is as yet no evidence of a nuclear explosion. The U.S. has not officially tested any atomic weapons since signing the Comprehensive Nuclear Test Ban Treaty in 1992. 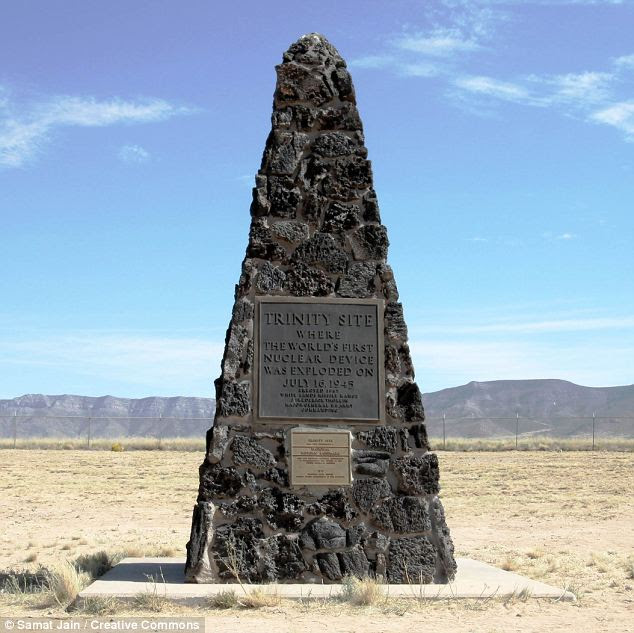 +4
The Trinity Site, where the world's first atomic bomb was detonated in July 1945, which is close to the source of the unexplained plume on the White Sands Missile Range 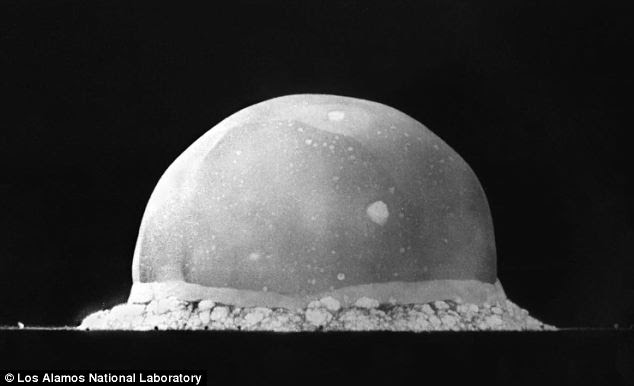 +4
The Trinity test explosion pictured 0.016 seconds after detonation. The 20 kiloton plutonium bomb was of the same kind as the Fat Man device that was a month later dropped on the Japanese city of Nagasaki
Nevertheless the bizarre 'weather' event's appearance over a military site has led to speculation that some kind of massive weapon has been exploded at white sands, propelling a huge amount of particulate debris into the atmosphere.
With the Carrizozo volcanic field just east of the site, another possible explanation could that a volcanic eruption - which has gone unreported for whatever reason - could be the source of the plume.
There have been been no eyewitness reports or photographs of the plume, and no official statements from agencies involved in either missile testing or geology.
Weather experts told KOB Eyewitness News 4 that they have no idea what it could be. So, whatever the source of the reading, the consensus appears to be that it was not weather related.

Publicada por Ufomania - The truth is out there à(s) 2:49 PM