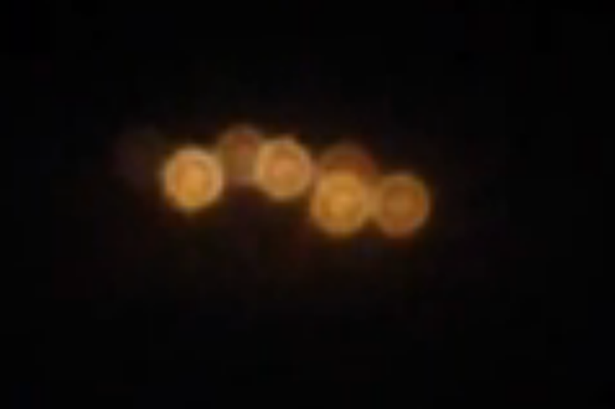 The unnamed passenger filmed the hovering lights - which appear to be in a saucer-shaped formation - as his flight from Greece approached Cardiff, Wales

An aeroplane passenger claims to have captured genuine UFO evidence on camera.
The man was returning from a holiday in Greece when he spotted a series of strange lights hovering in a flying saucer-shaped formation next to his plane.
He spent several minutes filming the lights in the pitch black night sky, between 20 and 30 minutes before the plane landed in Cardiff, reports WalesOnline.
While the man is unable to conclude what it was he saw and filmed, he's certain it constitutes an Unidentified Flying Object (UFO).
The unnamed man, 29, said: "We were flying from Greece to Cardiff. It was on Tuesday night and happened about 20­ to 40 minutes before we arrived at 10pm.
"The lights could have been from a few miles away - it was pitch black outside, so it's hard to say what it was.

"It was quite weird. It was very bright, it was the brightest thing I've ever seen. I just realised how bright it was and said to my girlfriend 'look at that!'"
Considering the footage was captured so near to landing, it is thought the spectacle was spotted in UK airspace.
The man added: "I was staring at it for a while before I picked up my phone to film it, but it was there for about three or four minutes.
"I thought it maybe could have been lanterns, but they didn't go away, they kept flying until I couldn't see them anymore.
"I really have no idea what it could have been - it was just really, really bright.
"UFO is a really broad term. That's what it is, you know, an unidentified flying object."

Source: Mirror
Publicada por Ufomania - The truth is out there à(s) 9:07 PM