We don't want to pick sides so we'll stay super-neutral in the debate, Bacup and Rossendale Borough FC have been forced to change their name after being subject of a haunting ghoul... 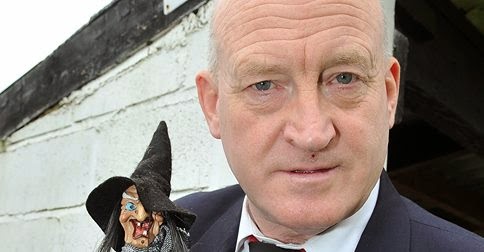 It's not exactly on the scale of the Hull City becoming Hull Tigers hoo-hah, but the name change of a local Lancashire club has been scrapped. Not because of supporter pressure - but because evil spirits apparently don't approve.
Bacup and Rossendale Borough FC of the North West Counties League have been forced to change their name back to the original Bacup Borough FC, after a string of haunting 'freak incidents'.
Club manager Brent Peters claims the players and staff are convinced the presence of a ghoul is the reason for their on-field problems, hampering his players' ability to score a goal.
"The other week, one of the players went through on goal but as he was about to shoot he felt a weight holding back his kicking foot!", he said.
Funny you should say that, Brent. Maybe somebody could tell Mario Balotelli about the potential of spirits interfering with footballers...

It's thought that in a desperate bid to shake off the presence, the club chairman brought in two extra personal trainers, the real boos-who of the trade, but even then they still couldn't exorcise the ghost.
In 1999, Bacup brought in specialist (we presume) Sue Angel to 'bless and cleanse' their home ground, something that seemed to have worked until the recent name change angered the spirits.
Club PA Debra O'Connor told the Rossendale Free Press: "The investigators asked the spirit about the name change, to which the twin-pronged machine indicated that there were spirits not happy.
"Then all of a sudden, the machine flew off the physio bed and smashed on the floor."
The name change should do the trick for Bacup. The spirit couldn't possibly float around very long - what ghost up must come down and all that.
If not, they could always ask the ghost if he wants to make his day boo at the weekend.