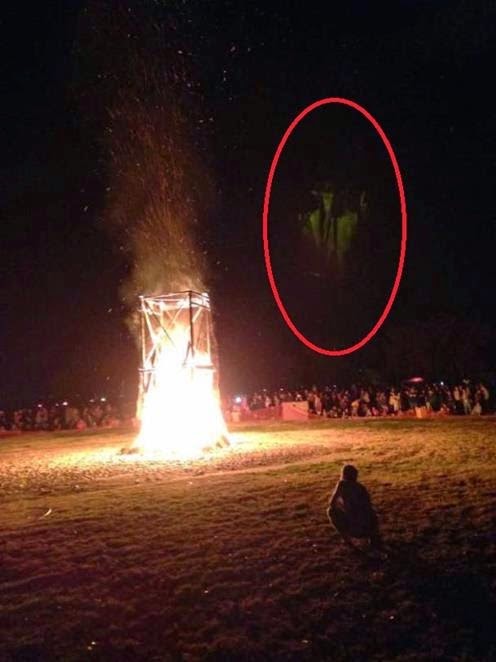 ALBUQUERQUE (KRQE) – The annual burning of the Mexican boogeyman, known as El Kookooee, draws crowds to Albuquerque’s South Valley. At this year’s event, the burning may have drawn more than just people.

“All of us were just freaked out by this thing,” said Steve Vaughan.
The figure was captured in a picture taken by a pair of local firefighters at the burning Sunday. A ghost enthusiast said it could be some sort of wizard or spirit.

“It’s either a real humanoid figure up there hovering in the sky or it’s an extremely good projection from either a slide or some kind of camera,” said Rick Walter.

The image is getting a lot of attention.

“I showed it to them and they were all, ‘Oh my gosh, that’s wild,’ ‘I want to see that, text it to me,’ and then they put it on Facebook and it kind of blew up from three,” said Josh Ellis.

El Kookooee is a Hispanic ritual where people scribble their fears on paper then throw the scraps into a fiery effigy. Firefighters Ellis and Vaughan were working the event Sunday.

“They lit it up and we are just standing there observing it, you know, taking pictures like everyone else and that’s when Josh, one of my coworkers, got the photo of the spirit or whatever it is,” said Vaughan.

After numerous doubletakes, the two realized the picture they had in front of them wasn’t of just people setting their worries on fire, it may have been something supernatural.

“We showed it to the director of the event and he said, ‘Oh that’s El Kookooee. He’s coming to take all of the fears away,’ ” said Vaughan.

Vaughn and Ellis said the photo is 100 percent authentic. The figure only showed up in a few pictures taken by the firefighters. It didn’t show up in any video. Ghost enthusiasts said it may have been a camera flare, but they can’t be sure.
Publicada por Ufomania - The truth is out there à(s) 6:45 PM