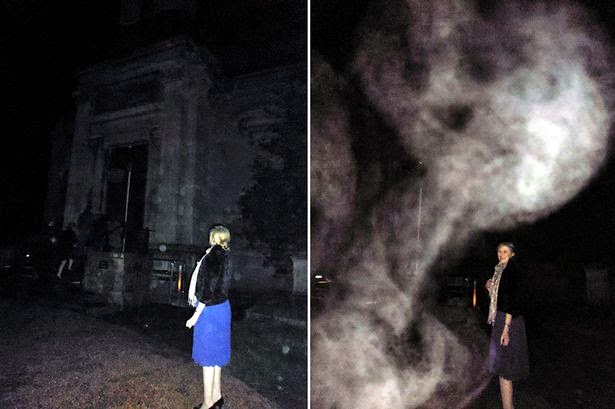 It isn't unusual to fall foul of a photobombing frolicker at a wedding reception - but it's pretty out-of-the-ordinary when the snap-crasher in question is a GHOST.
The spooky picture on the right, taken by a couple of wedding guests, appears to show a ghostly figure resembling part of an over-sized skeleton.
Oliver and Mary Davey were celebrating a wedding at Arnos Vale Cemetery in Bristol when they decided to take some snaps in the chapel grounds.
But what they saw was enough to scare the pants off Derek Acorah.


Teacher Oliver took a picture of Mary but it wasn't very good so he took another - but the next frame revealed the ghoulish outline of a head, neck and shoulders.
The pair hurried into the wedding reception, where they showed the scary image to guests - and they were every bit as shocked.
Oliver, 35, said: "I took the first picture, but I realised Mary wasn't looking at the camera so I took another one.
"I saw the spooky face straight away. I was just confused and a bit shocked.


"I was amazed really. I showed my wife and a lot of the other wedding guests.
"I am sure there wasn't anyone near me - nobody was smoking - so I don't know what it is.
"The funny thing is I had just been having a conversation about how I didn't really believe in ghosts, so it was spooky timing."
Oliver and Mary, 32, a sustainability advisor, noticed the scary face around 6.30pm on Saturday.


The Arnos Vale Cemetery was established in 1837 as an Arcadian landscape and includes a number of listed buildings and monuments.
It is said to be haunted by a nun who was bricked up in a wall by her distraught sisters after she committed suicide when she got pregnant.
A weeping woman dressed in black is also said haunt the grave of her husband who was killed in WW1, and third woman is said to have been seen in the area after being mistakenly buried alive.
Source: Mirror
Publicada por Ufomania - The truth is out there à(s) 4:03 PM