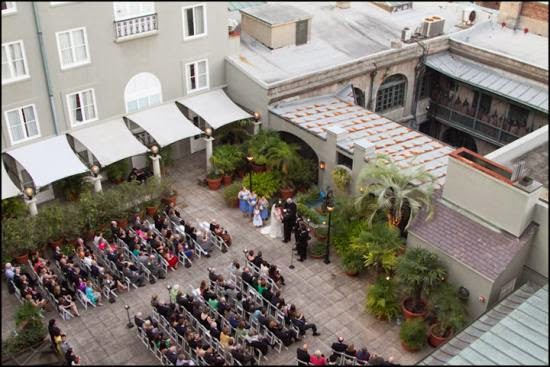 "Oh my, that's a lovely aerial picture of your wedding dear. And did you...wait, who are all those creepy hooded people standing on the balcony of the building directly behind the ceremony?!" Yes, it's a little known fact that every wedding is secretly blessed by the Brotherhood of the Shadowy Cloak, who attend in person. Finally, an overhead shot has revealed this secret to the general public.
Actually, the explanation is a little more prosaic. It's part of an art installation:

The Goddess Fortuna and Her Subjects in an Effort to Make Sense of it All is Dawn’s over-the-top multi-media installation inspired by author John Kennedy Toole, who never lived to see his extraordinary novel, A Confederacy of Dunces, published and then win the Pulitzer Prize in 1981
...this installation, hosted by The Historic New Orleans Collection, contains 66 life-size robed figures, each with a dunce hat upon its head. There’s a “symbolic” recreation of Ignatius’s bedroom over the fountain in the courtyard; an audio piece of Ignatius’s favorite medieval philosopher Boethius’s text in Latin wafting from the staircase; and a special-effects video that appears as a mirage of the Goddess Fortuna herself. 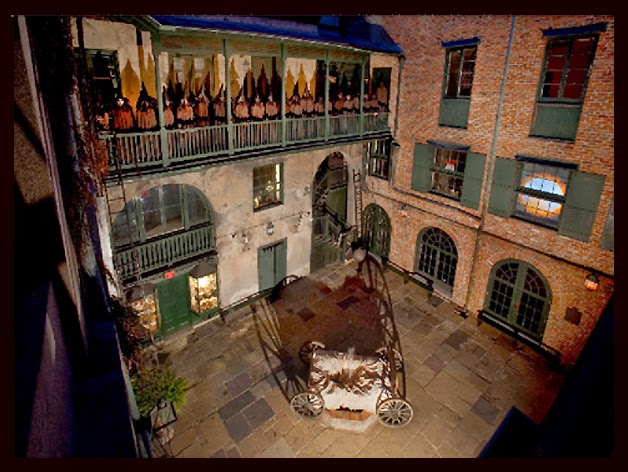