A photographer captured a pair of unidentified objects apparently hovering near the flight path of a passenger jet, as he took pictures of huge storm clouds gathering over Bondi Beach. 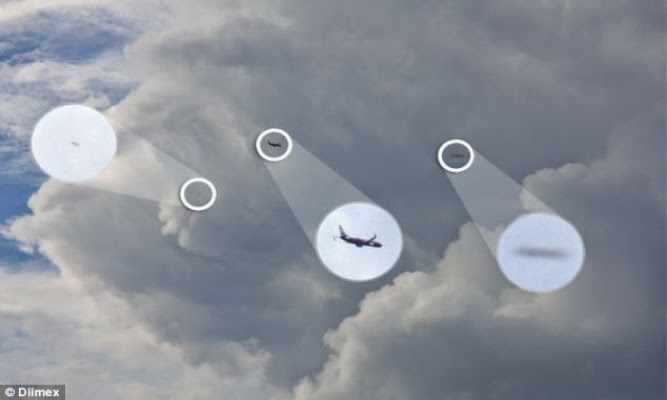 Photographer Dan Toomey snapped photos of the two objects flying either side of a Virgin passenger jet while taking photos of angry skies off Sydney’s coast
Mr Toomey believes they are unidentified flying objects or UFOs.
“When I was taking photos I saw nothing unusual other than a new storm,” he said.
“I uploaded the photos only minutes later on my laptop, and I zoomed in and said “What is this”?’

In the series of photographs, taken in 2009, a saucer-like and cigar-shaped object are seen flying either side of a Virgin plane. 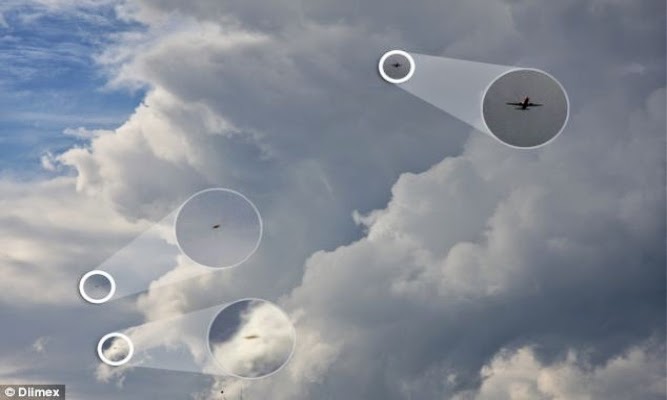 Over the next few days, Mr Toomey tried to find out what the objects were, but was unsuccessful.
“I tried to experiment to determine whether or not any insects or birds could have produced similar results, which is impossible, I’ve consulted with other photographers,” he said.
“The photographs are authentic and they are objects that cannot be explained”.
“If you invert the photo to a negative, the plane appears white as a solid object and so do the other objects.” 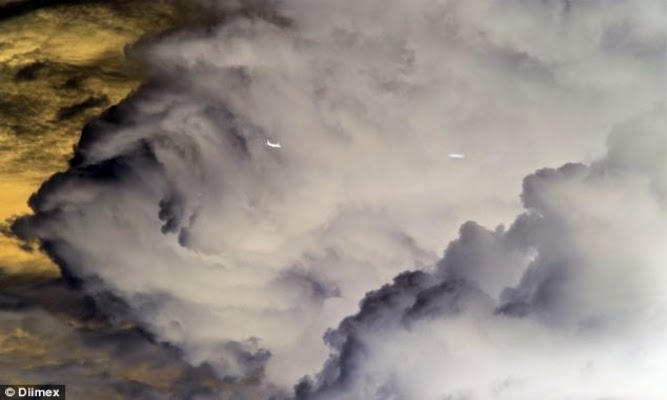 But this is not the first time Mr Toomey has spotted an unexplained object.
He said he had seen them with his own eyes but had rarely captured them on film.
“It always pays to have a camera handy,” the 38-year-old said.
Even though the photos were taken in 2009, Mr Toomey has been holding them close to his chest.
But with the unexplained disappearance of the Malaysian Airlines flight, he felt it was time to share them.
“There’s a big a question mark next to that plane, and a lot of conspiracies surrounding what happened,” Mr Toomey said.
“Maybe it’s the right time for the world to know that these things are real.”

See also: Similar sightings off the skies of New Zealand

Source: VP
Publicada por Ufomania - The truth is out there à(s) 9:57 AM