A U.S. scientist wants to detect Mars life and teleport it to Earth. And he already has the technology to do it. 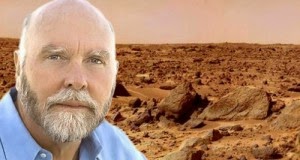 J. Craig Venter, Ph.D. is a leading scientist in the field of genomic research. He is also the founder and CEO of Synthetic Genomics Inc., a privately held company dedicated to “commercializing genomic-driven solutions to address global needs such as new sources of energy, new food and nutritional products, and next generation vaccines.”

He and his research team have been field-testing technology that he believes will revolutionize the search for extraterrestrial life. According to the South China Morning Post, “Not only does Venter say his invention will detect and decode DNA hiding in otherworldly soil or water samples – proving once and for all that we are not alone in the universe – it will also beam the information back to Earth and allow scientists to reconstruct living copies in a biosafety facility.” He hopes to detect Martian life and bring it to Earth using a digital biological converter, or biological teleporter.

The India Times describes, “Dr. Venter’s machine would merely create a copy of an organism from a distant location — more like a biological fax machine.” Storing genetic code in a computer and transmitting it just like any other data is the basic idea.
Dr. Venter’s team, and scientists from NASA’s Ames Research Center, recently conducted field-testing of this technology in the Mojave Desert south of Baker, California–a dry environment similar to Mars. Researchers tested the unit that would, in theory, send data back from Mars. But according to Dr. Venter, a prototype of the unit that would receive the transmitted data here on Earth exists as well, and will be available for sale next year.
India Times explains that this machine will be able to “automate the synthesis of genes by stringing small pieces of DNA together to make larger ones.” With this technology, “A person with a bacterial infection might be sent the code to recreate a virus intended to kill that specific bacterium.” Venter optimistically surmises that this technology will enable doctors to “send an antibiotic as an email,” and allow diabetics to “download insulin from the Internet.”

Publicada por Ufomania - The truth is out there à(s) 6:58 PM