Are we not alone? A family in Brazil suddenly stopped what it was doing when a family member spotted a suspicious object flying over the sky on December 18, 2013. The event was captured on video twice. 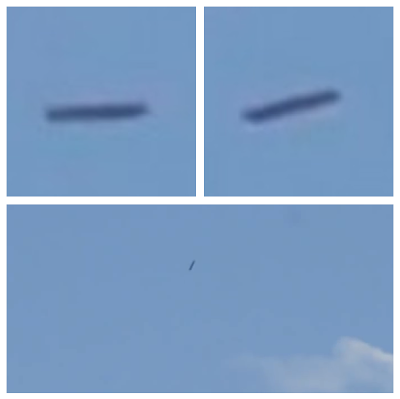 In awe, the Brazilian eyewitness referred to the object in a friendly manner.
“My friends are visiting.”
UFO Sightings Daily reported that this unidentified flying object was found floating high up in the skies of Segni dal Cielo, Brazil. One video recording lasted for 1 minute and 33 seconds, while the second video lasted for 1 minute 7 seconds.

The eyewitness described of the strange object several times as “grande” which means large.
On both video recordings, an elongated cylindrical object was found flying over Brazil's cloudless blue sky. Described more like a cigarette, the suspicious object moved effortlessly and silently across the atmosphere.
Scott Waring, coordinator of UFO Sightings Daily and a UFOlogist, reported that the object slowly moved across the air, rolling end over end at times. The second video which lasted for a little more than a minute has a higher detail of the object which shows that the craft does not seem to have any seams or openings.

UFO Sightings Daily has already reported several events that greatly shows the possibility of underground alien presence all over the world. This UFO sighting in Brazil is just one of the many reported sightings that have left people baffled, yet in awe of what they have just witnessed.
Alex Collier is a voluntary contactee of Ethical Extraterrestrials who has alleged that underground regressive aliens are part of what Dr. Michael Salla has described to be a Military Extraterrestrial Industrial Complex or MIEC.  According to Dr. Salla, human elites are part of this "MIEC".
Publicada por Ufomania - The truth is out there à(s) 2:04 PM