Is There An Organ In Your Brain Which Seats Your Soul? This May Be The Answer

“The light of the body is the eye: if therefore thine eye be single, thy whole body shall be full of light…” Matthew 6:22-23 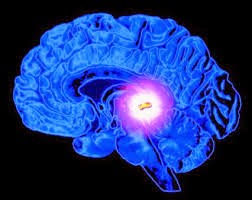 A Gateway To Between The Physical And Metaphysical?

Situated at the anatomical center of our brain lies a mysterious gland that may be the intermediary gate that bridges our physical and spiritual experiences here on Earth. Seventeenth-Century French philosopher Rene Descartes coined this organ, called the pineal gland, as the “seat of the soul”, as he believed it provided people with a medium from which our soul could be expressed through our physicality. The pineal gland has been a topic of great debate over the past couple of decades as the science community is still trying to discover its complete biological function. Dr. Rick Strassman, M.D., author of DMT: The Spirit Molecule, has dedicated years of research to the pineal gland as he suggests that this gland is the factory for a powerful brain chemical called DMT (Di-Methyl Tryptamine) which when produced induces a person into a psychedelic and mystical experience.  Many different cultures talk about our “third eye,” and modern theories suggest that this may be a reference to the pineal. Even more peculiar is the fact that pineal gland symbology can be traced to many civilizations such as the Romans, Mexicans, Egyptians, Babylonians and the Greeks. It is interesting to note that even the Catholic Church displays pineal gland imagery, as the Vatican Square contains the largest pineal-like statue in the world. So what could all of this mean? Is there ancient knowledge of this gland that previous cultures had access to? Furthermore, what role does the pineal gland play in our spiritual experiences and how can we explain this in physiological terms?
One of the earliest accounts of the pineal gland is in the writings of a third-century B.C. Greek physician named Herophilus, where he discusses the piniform or pinecone shaped organ as being the size of our pinkie fingernail. The name comes from the Latin word pinea, which literally means “pinecone.” As mentioned previously, the gland sits at the approximate geometric center of the brains mass. Additionally, the gland is not technically part of the brain, as it is not protected by the blood-brain barrier.  In his book DMT: The Spirit Molecule, Dr. Rick Strassman discusses the glands unique solitary status within the brain,

“[…] All other brain sites are paired, meaning that they have left and right counterparts; for example, there are left and right frontal lobes and left and right temporal lobes. As the only unpaired organ deep within the brain, the pineal gland remained an anatomical curiosity for nearly two thousand years. No one in the west had any idea what its function was.”

Additionally, the pineal gland sits close to the sensory and emotional centers of the brain, which could explain why spiritual experiences can evoke so much emotion and sensation. In the 17th century Rene Descartes was searching for the source of our thoughts, and proposed that the solitary pineal organ could be the generator. Descartes was interested in the location of the pineal in relation to the cerebrospinal fluid byways, and suggested that when the pineal gland “secreted our thoughts” that they moved through the cerebrospinal fluid to make its way to the rest of the brain.

David Wilcock’s New York Times bestseller  The Source Field Investigations discusses the idea that our pineal gland is our “third eye” which provides us with visuals during psychedelic and near death experiences (NDE), and also while we dream, finding biological evidence to support this claim,

“[…] it is apparent that several relationships exist between the pineal gland and retina. The similarities in development and morphology have been obvious for many years…. Although the mammalian pineal gland is considered to be only indirectly photosensitive, the presence of proteins in the pineal which are normally involved in photo-transduction [light sensing] in the retina, raises the possibility that direct photic events may occur in the mammalian pineal gland…” 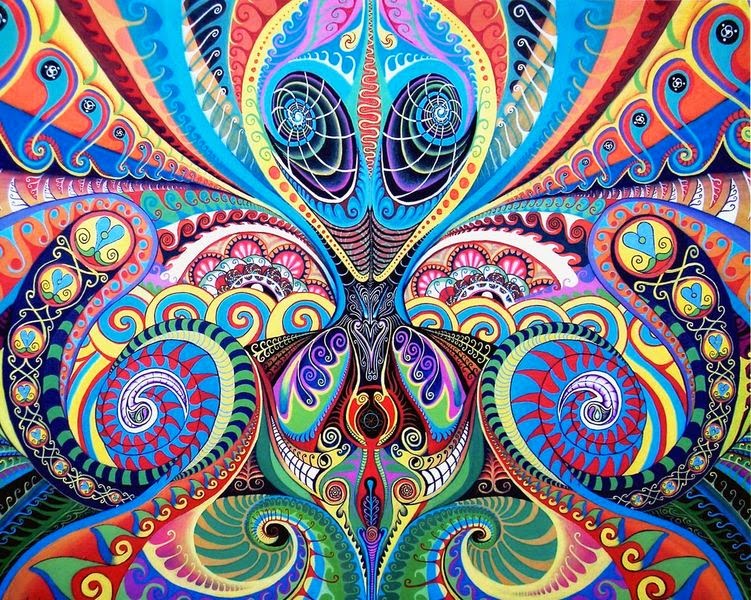 This idea has become a common theory in pineal gland research. Needless to say the pineal gland does appear to be set up for signal transduction, just like the retina of the eye, where it picks up visual images and sends them to the brain. Scientists suggest that the interior of the pineal gland is completely black, but we must question why our bodies would create this third eye with light detecting cells if there was no light to be detected in there. Could the images that are created when we dream or during an out-of-body experience come from the photic cells inside the pineal gland?

Strassman proposes that a potent psychedelic molecule called DMT is produced by the pineal gland. This molecule is found innate in nature, such as in certain grasses and tree roots and even in our own bodies. The experience brought on by humans who smoke isolated forms of DMT is said to be profoundly vivid, spiritual and life changing. Pineal DMT production must be regarded as plausible considering that the pineal gland is known to produce melatonin and serotonin, two neurotransmitters which are structurally very similar to DMT and which play a part in our mood and sleep cycles.

To add to the mystery, let us consider the blatant pineal gland imagery that is expressed in sacred art and architecture all around the world. As mentioned before, the word pineal comes from a Latin word meaning “pinecone”, and therefore the pinecone was used to represent the pineal gland throughout history. Wilcock’s The Source Field Investigations devotes an entire chapter to the pineal gland and its representation throughout history. The following are just a few examples from the book:
“[…] 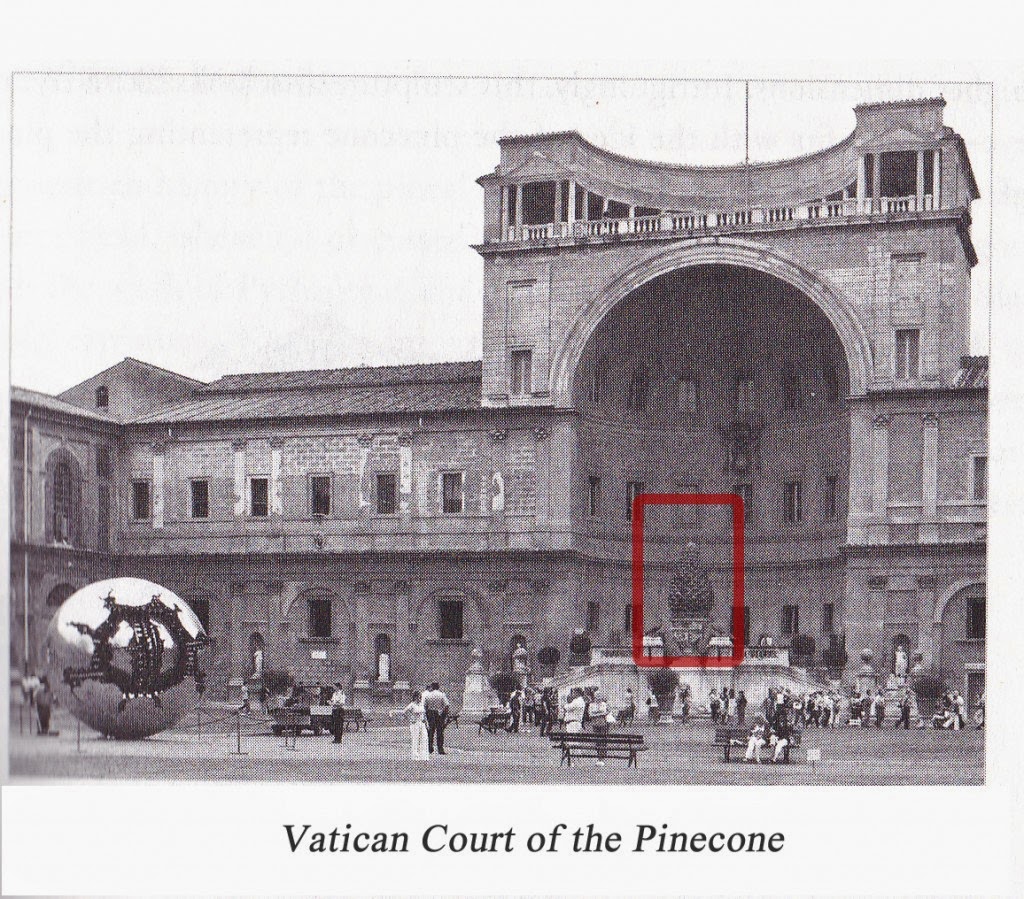 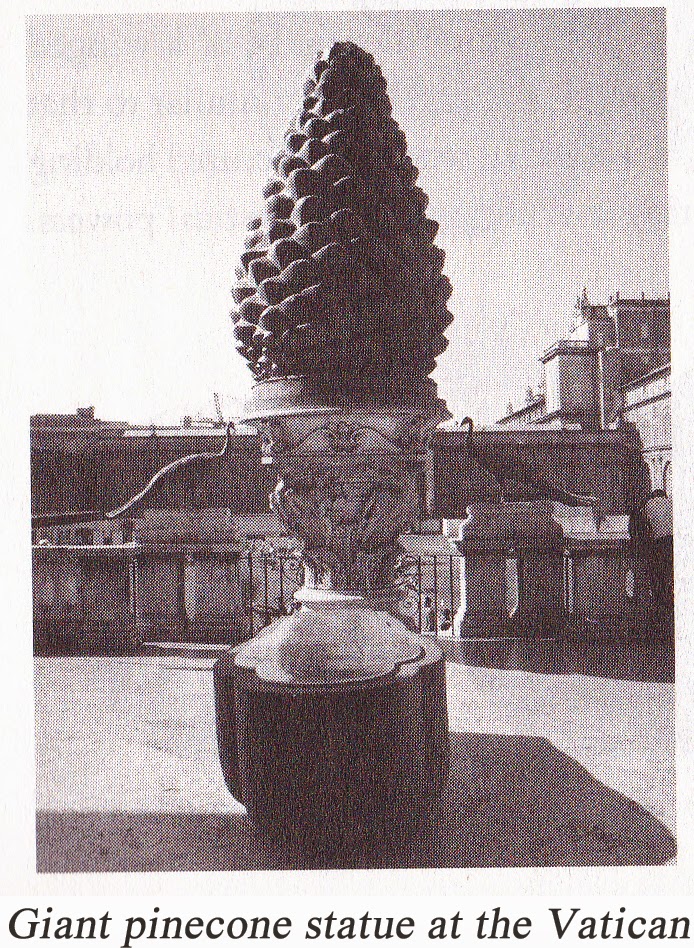 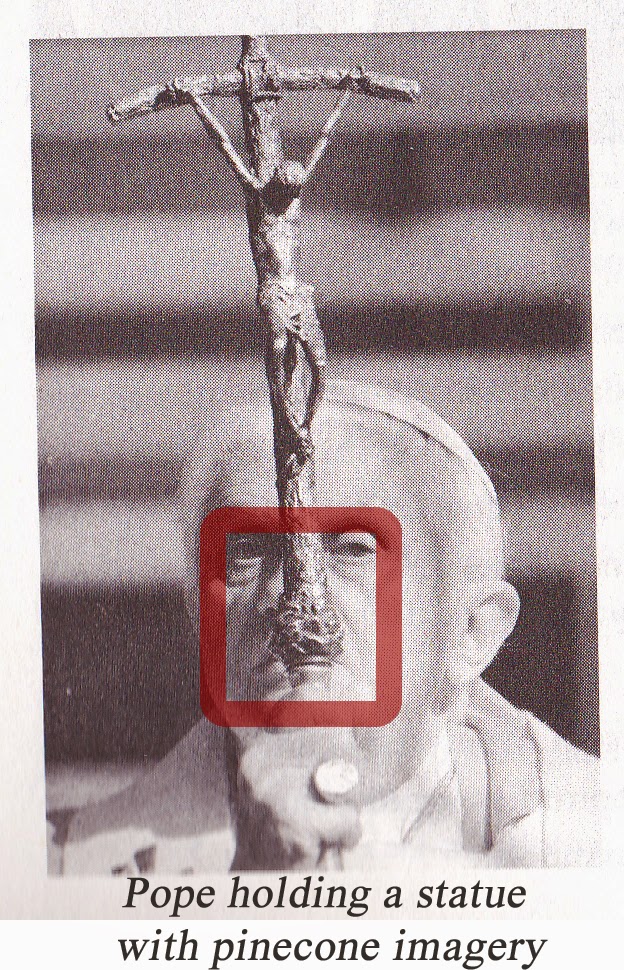 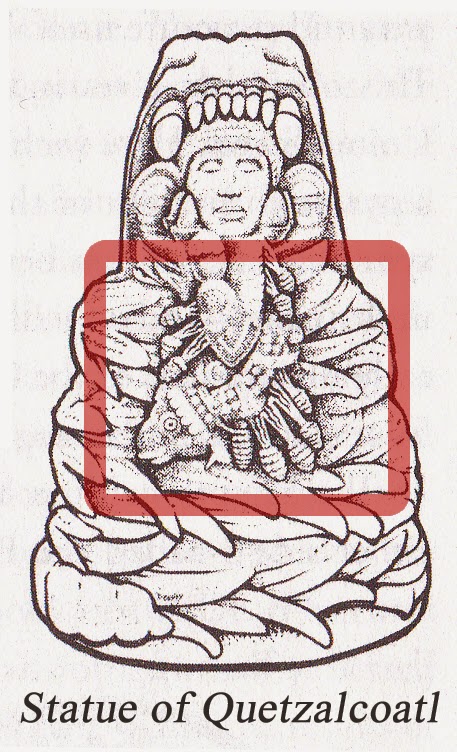 Perhaps one of the most disturbing facts is how much the Catholic Church promotes pinecone imagery. It is clear that this was an extremely important symbol to the early Church fathers considering the placement of the giant pinecone statue in the Vatican. Is the Vatican concealing sacred knowledge that would contribute to mankind’s physical and spiritual evolution? Wilcock investigates further into the matter in his book, describing the written history of the pineal gland:

“[…] Plato says in The Republic (Book VII), ‘the soul through these disciplines has an organ purified and enlightened, an organ better worth saving than ten thousand corporeal eyes, since truth becomes visible through this alone”
Additionally, masonic scholar Manly Palmer Hall is quoted in the Occult history of Man as stating the following:
“[…] The Hindus teach that the pineal gland is the third eye, called the Eye of Dangma. It is called by the Buddhists the all-seeing eye, and is spoken of in Christianity as the eye single…[the pineal gland] is a spiritual organ which is later destined to be what it once was, namely a connecting link between the human and the divine…”

It is evident that the pineal has been a focus throughout history, with philosophies of all cultures discussing this organ in relation to the ever-attaining journey towards spiritual enlightenment. It is possible that the pineal gland is our connection to the divine, providing us with visions during many metaphysical experiences. The next question arises, why is it being kept secret?  Modern theories suggest that the “mystery schools” which have been hidden in secrecy for millennia hold the knowledge of the pineal gland that many ancient civilizations understood, and these secret societies are keeping this information from the general public to maintain more power and control.

Cleansing Your Third Eye And Reclaiming Your Potential

With this information in mind, let us look at the effect that our environment and diet have on our pineal gland. As mentioned earlier, the pineal gland is not protected by our blood brain barrier, which renders the fluid inside the pineal susceptible to mineral deposit build up. These minerals compile as hard white clusters, and can appear on X-rays or MRI’s. One theory suggests that the heavy minerals and toxins that are dumped into our environments and that are consequently absorbed into our bodies have a retarding effect on the potential power of our pineal gland. One of the main chemicals that cause mineralization of our pineal gland is Fluoride. As many of us know, fluoride is considered an FDA approved medicine which aids in the re-mineralization of our teeth, preventing tooth decay. Fluoride is dumped into most North American communal water systems, making it increasingly difficult for the population to avoid intake of this chemical. It is safe to theorize that the powers in control have an understanding of this mineralization process, and are utilizing Fluoride and many other toxins to debilitate our true potential as human beings. On a positive note however, over the past five years we have seen a substantial increase in the removal of Fluoride from city water all over the world. People are taking the power back into their own hands, which is inspiring in its own right.
We now understand that our pineal gland may hold the secrets to the divine enlightenment which has been searched for and talked about since the earliest accounts of mankind. So what can we do to cleanse our pineal gland? Removing fluoride is the first huge step in this process. Get the message out in your own community and be the one who makes a difference. There are also other supplements such as blue ice skate fish oil which will help decalcify the pineal gland.
Our hidden potential now seems infinite, a notion which is spreading throughout our planet. So reclaim your potential today by cleansing your pineal gland!

Source: Collective Evolution
Publicada por Ufomania - The truth is out there à(s) 3:14 PM