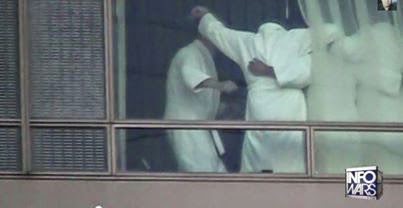 Infowars has obtained startling footage which shows individuals inside the Marriott Hotel, site of Bilderberg 2014, engaged in a bizarre homo-erotic hotel room photo shoot which was captured on camera.

The video was shot by an independent journalist from the protest area opposite the Marriott earlier this evening.
The clip shows four unidentified individuals, possibly Bilderberg security, dressed in bath robes huddling with their backs to the hotel bedroom window posing for a photograph.
A flash then goes off in the background before the group of men turn around to face the window and realize they are being recorded. The older men then disappear from the window looking sheepish as a younger man approaches the window before becoming excited and displaying a camp gesture.


The video is strange because the Bilderberg Group itself is famously publicity shy and secrecy obsessed. The idea of anyone inside the security-obsessed location posing seductively in bath robes is odd to say the least.

Although the notion of displays of homo-eroticism may seem unbelievable on the surface given Bilderberg’s serious nature, Bohemian Grove, another secretive event at which many of the same individuals are present, is renowned for similar displays of homosexual frivolity.
In 2004, leaked audiotape emerged of former U.S. President Richard Nixon discussing what took place at the Bohemian Grove retreat, an annual summer camp in California attended by global power brokers.
“The Bohemian Grove, which I attend from time to time, It is the most faggy goddamned thing you could ever imagine with that San Francisco crowd. I can’t shake hands with anybody from San Francisco,” said Nixon.
Infowars reporters are on the ground in Copenhagen all week covering Bilderberg 2014. Keep up to date with the latest at http://infowars.com/b/
Publicada por Ufomania - The truth is out there à(s) 7:12 PM