A painted "elf door" leans against rocks near the Icelandic town of Selfoss. Belief in the unseen runs high in Iceland. 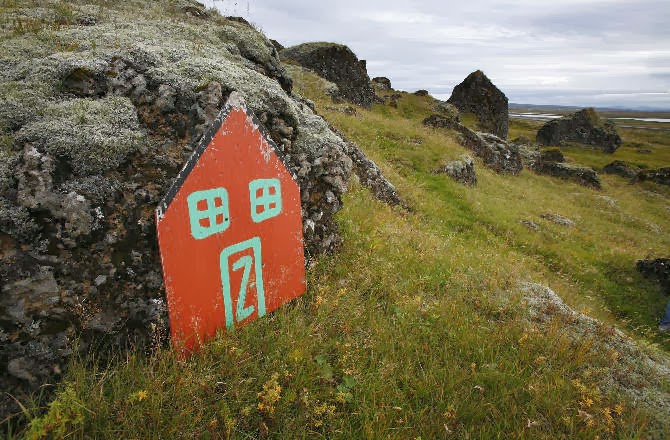 Over the past few months, dozens of environmentalists in Iceland have staged a high-profile protest against a road scheduled to cut through an area of volcanic rock on the Álftanes peninsula, not far from the capital of Reykjavik. It is only one of countless eco-protests in the world, but the campaign has made international news, because some of the protesters claim the proposed road would disturb the habitat of elves who live among the rocks.


Elves and fairies are closely related in folklore, and though elves specifically seem to have sprung from early Norse mythology, by the 1800s fairies and elves were widely considered to be simply different names for the same magical creatures. Polls find that over half of Iceland's population believes in elves, or at least doesn't rule out the possibility of their existence.
But why do so many Icelanders believe? The passed-down tales are just part of the picture. Iceland's concept of the natural world takes on a mystical tone; pair that with environmentalism, the want to preserve this mystical world, and magical creatures almost make sense.
In the book "Icelandic Folk and Fairy Tales" (Iceland Review Library, 1987), folklorists May and Hallberg Hallmundsson explain how the Icelandic conception of nature is intimately tied to its folklore of elves and fairies.
"Icelanders are generally very attached to their country, perhaps more so than most other peoples ... It is a love for the land itself in its physical presence, for its soil, mountains, streams, valleys, and even its fire-spewing volcanoes and frozen wastes of ice," the authors write. "To the Icelanders, the land was never just an accumulation of inanimate matter — a pile of stones here, a patch of earth there — but a living entity by itself. Each feature of the landscape had a character all its own, revered or feared as the case may be, and such an attitude was not a far cry from believing that it was actually alive."
That life spirit said to inhabit the hills and streams of this island nation has come to be personified as elves and other magical beings. While it's easy to mock such folk beliefs as backward or antiquated, most cultures profess a belief in supernatural ormagical beings, including demons, angels, ghosts and genies (djinn). These elves, like the fairies of early British lore, have many human qualities and may exact revenge if mistreated or disturbed. Elves and fairies are believed to live in their own separate, hidden world and generally ignore humans, but must be treated with respect; to do otherwise invites anything from mischievous pranks to child abduction by elves.
This wouldn't be the first ecological protest to involve diminutive magical beings.
Source: Dnews
Publicada por Ufomania - The truth is out there à(s) 11:43 AM