January 30, 2014 -- (TRN http://www.turnerRadioNetwork.com ) -- A man identifying himself as Dr. Kaplan, a Professor in the Astronomy Department at the University of Texas at Austin, has made use of the McDonald Observatory at that school to reveal the existence of an inbound planet heading toward Earth,  and has provided the actual coordinates for the general public to see it themselves. TRN has those coordinates and reveals them below.Dr. Kaplan videotaped his work inside the McDonald Observatory and TRN s has that video for you to see. 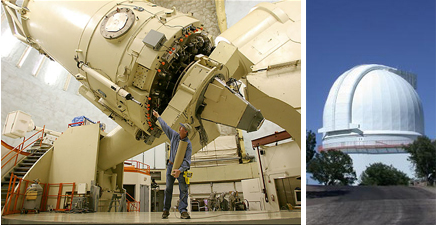 Using the 2.7m Harlan J. Smith telescope at the McDonald Observatory in Texas, Dr. Kaplan tracked this planet on January 26, 2014 at about 10:00 PM Texas time.

In the video, Dr. Kaplan did NOT say whether or not this planet would actually collide with Earth; he needed more time over several nights to make that computation.  However, whether the planet collides with Earth or not, Dr. Kaplan says its gravity will affect Earth in terrible ways long before it gets here.

According to Dr. Kaplan, the planet-sized object will be at Earth by August, 2014.  Kaplan says prior to its arrival, Earth will experience more and more adverse effects from the gravity of this planet.  TRN inquired of other astronomy and geological experts and they told us that if Kaplan's  scenario is true, the problems Earth will experience would begin with weather anomalies and tidal anomalies, will increase to earthquakes then volcanic eruptions as Earth's magma is pulled by the gravity of the approaching planet,.  The experts went on to tell us the troubles would increase further to horrific tsunamis 1000 meters high, moving at 1200 kilometers per hour striking coastal regions around the Earth and, ultimately, when this planet is closest by August 2014, Earth will suffer widespread destruction from shifting tectonic plates on a massive scale.  One expert even claimed that depending upon the size and gravity of the planet, and its angle of approach, the gravity of this other planet could actually STOP the Earth from rotating on its axis.  He likened it to a vehicle traveling at 1,000 miles per hour, and having the brakes slammed on; the resulting inertia of all objects on earth would cause them to continue moving while the earth was stopping; sort of like what happens in a car wreck when the car suddenly stops, but the passengers fly forward from their own inertia.   While Kaplan himself did not make any such claims, he did say the approach and  passage of this planet "will reconstruct the surface of the Earth into something we don't even know."

In the meantime, as of January 26, 2014 at 10:00 PM Central US Time, viewing the planet from the McDonald Observatory in Texas,  Dr. Kaplan said the coordinates to see this inbound planet are:

Moving toward earth at 200 Kps

Dr. Kaplan was NOT precise as to exactly what DAY in August, this planet would be closest to earth.  So today being January 30, 2014, and using today as the start date, the number of days from today until August 1 is 182.

At a speed of 10,713,600 miles per DAY, the estimated distance of this planet from earth as of right now is one-billion, nine-hundred forty-nine million, eight-hundred seventy-five thousand, two-hundred miles. (1,949,875,200 miles)

ARE SUCH SPEEDS EVEN POSSIBLE?

Lest you think such speeds are absurd, consider this from LiveScience.com:

As passengers on Earth we are all carried around the sun at a mean velocity of 66,600 mph. Add to that dizzying notion the fact that we are spinning (at the equator) at a 1,000 miles-per-hour (an action that causes the planet to bulge outward).

Of course, these velocities are relative (to the sun and to the poles, respectively). The reason we don't feel the rush is the same reason we aren't pinned to our seats while in an airplane moving at constant speed. Velocity can only be measured with reference to another object moving at a different velocity, and we cannot feel velocity while in a constant frame of reference.

This is why it might be news to you that our entire solar system is whizzing around the center of our galaxy at a fairly inconceivable 560,000 mph. The galaxy is also moving with respect to other galaxies in the universe. And, for all we know, the whole universe is moving, but now we're getting into great unknowns.

This speed of Earth information is also confirmed by the NASA Goddard Space Flight Center, HERE.

According to SPACE.COM the Earth is 92,955,807 miles from the sun.  Certainly the sun's gravity affects Earth; it keeps us in orbit!  Moreover, consider the reality of gravity's power by realizing the sun's gravity not only keeps Earth in its orbit, it does the same for all the other planets, including the massive planet Jupiter and even the tiny, far-more-distant Pluto.

According to UNIVERSETODAY.COM, Jupiter’s semi-major axis is 483.78 million miles from the Sun. Like every other planet in our Solar System, Jupiter’s orbit is elliptical. When Jupiter is at perihelion (closest approach) it is only 460,237,112 miles, but when it is at aphelion (most distant) it is 507,040,015 miles from the Sun. Average the two and you get Jupiter’s semi-major axis. Jupiter is about 5.2 times farther from the Sun than Earth is. Since one AU is equal to the average distance from Earth to the Sun, that translates into Jupiter being 5.2 AU from the Sun, yet the sun's gravity keeps Jupiter in its orbit.  The picture below from NASA compares Earth to Jupiter and shows how massive it is compared to us; yet the sun's gravity controls Jupiter from 483 Million miles away! 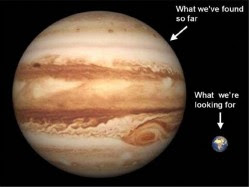 Of course, our sun is HUGE and DENSE which gives it such massive gravitational power.  We do not yet know how large the incoming planet is, but according to the information from Dr. Kaplan, in order for it to be at Earth by August, it is already closer to us than Pluto!  Depending on the size of this unknown planet and its density, it is not unreasonable to believe that its gravity is already affecting Earth and may have been doing so for quite some time already.  Maybe this explains the weird weather Earth's been having for awhile?

THE VIDEO     (UPDATE 1-31-2014 -- the original video author has made a Copyright Claim.  TRN has made a "Fair Use" Counter-Claim)
The original author of the video, pictured below, turned out to be a Graduate Student (Not a Professor) named Kyle Kaplan at the University of Texas at Austin, Astronomy Program.  His contact information is made publicly available on the University's Observatory web site  HERE.

According to TRN sources, Dr. Kaplan was grabbed-up at the observatory by authorities for what he was doing andforced under duress to make another video retracting this material, allegedly because it was a "joke."

Who would want it retracted and why?  Well, if people think they're doomed, they may stop paying their taxes and their bills; there may be widespread panic and a breakdown of social order to the point of chaos.  The powers that be can't have any of THAT, can they?

Despite his retraction, the video below was still sent to us for publication.  Further, despite the retraction, no one can argue the Observatory's telescope was, in fact, pointed at (and LIVE tracking) the coordinates shown above. The Observatory's own targeting and tracking computer SHOWS that fact in the video!   If there's nothing there, why was the observatory looking at it and tracking it? (an inconvenient truth.)  Here's a screen shot of the tracking computer close-up, showing the day, date and time as well as, in yellow highlights, the actual planet coordinates: (Click Image twice to enlarge)

Further, this graduate student, by his own admission in the video, claims to have "hacked" into the NASA Goddard Space Flight Computers to get the "Closely guarded secret" of this planet's coordinates.  Publicly admitting to hacking government computers, which may have been a crime, is newsworthy.

Such conduct by a Graduate Student using multimillion dollar facilities to intentionally alert the public about a "danger" to the planet, then claim it was a "joke" is also newsworthy. As such, TRN made use of the video, only in part,  for non-profit news purposes, which falls under the Fair Use Exemption of US Copyright Law 17 USC 107.

In either case, TRN believes this is newsworthy.   Therefore, TRN is fighting the copyright claim because, as stated earlier, no one can argue the Observatory's telescope was, in fact, pointed at (and LIVE tracking) the coordinates shown above. The Observatory's own targeting and tracking computer SHOWS that fact in the video!   If there's nothing there, why was the observatory looking at it and tracking it?

Further, a graduate student publicly impersonating a Professor/Doctor, publicly claiming to have "hacked" federal government computers to obtain a "closely guarded secret" and using multimillion dollar facilities funded in part by taxpayers to tell the world it is in danger, then claiming it was a joke, is also newsworthy.  In either case, we at TRN believe it serves the pubic interest to cover these events.  After all, we don't make the news, we report it.

Is this a HOAX?????? That's easy for all of you to verify: Grab a telescope and look at the coordinates yourself.  If there's a planet there, and you see it getting larger (i.e. closer) over a few nights, then this is real and we've got potential problems.