An ominous 'alien-like' noise was heard across the city this week as strong winds battered the region.

Perplexed shoppers took to Twitter to report the ominous howling noise which seemed to reverberate for miles. One Twitter user described it as a "low, evil, end-of-the-world noise" while others likened it to the imminent arrival of an extraterrestrial spacecraft. 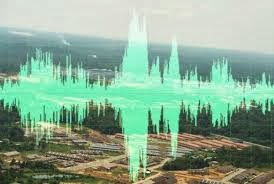 As it turns out the sound was being generated by strong winds blowing across the Beetham Tower, a 47-story skyscraper that has been embroiled in controversy. The bizarre design flaw has proven such an embarrassment in fact that the phenomenon has become known as "The Beetham Tower Howl", prompting architect Ian Simpson to apologize to residents for the disruption caused by the noise.

"The problem is caused by the glass and metal sculpture at the top of the building," said acoustic and audio engineering expert Prof. Trevor Cox. "When the wind rushes past the edge of the glass panes turbulence is created. This is very similar to how turbulence generates sound within a recorder."

Source: Mirror
Publicada por Ufomania - The truth is out there à(s) 4:18 PM