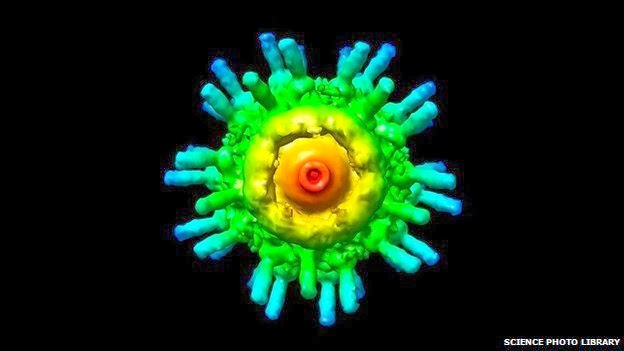 For the first time, scientists have placed tiny motors inside living human cells and steered them magnetically.
The advance represents another step towards molecular machines that can be used, for example, to release drugs into specific locations within the body.
There is interest in the approach because it could enhance the benefits of drugs while minimising side effects.
The rocket-shaped metal particles were propelled using ultrasound pulses.
Materials scientist Prof Tom Mallouk, from Penn State University, and colleagues have published their research in the journal Angewandte Chemie International Edition.

"As these nanomotors move around and bump into structures inside the cells, the live cells show internal mechanical responses that no one has seen before," said Prof Mallouk.
"This research is a vivid demonstration that it may be possible to use synthetic nanomotors to study cell biology in new ways." 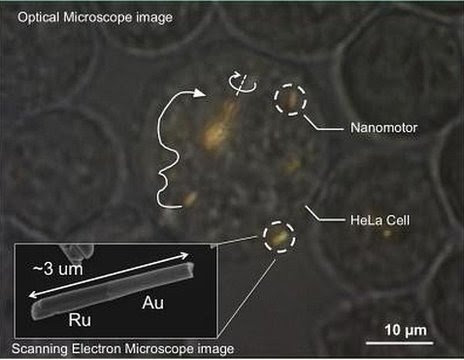 This microscope image of a cell shows some of the gold-ruthenium nanomotors
Up until now, nanomotors have been studied only "in vitro" - in laboratory apparatus - but not in living human cells.

At low ultrasonic power, the nanomotors had little effect on these cells. But when the power was increased, the nanomotors surged into action, zooming around and bumping into organelles - structures within the cell that perform specific functions.

One dream application of ours is Fantastic Voyage-style medicine”

Prof Tom Mallouk Penn State
The nanomotors could be used as "egg beaters" to essentially homogenise the cell's contents, or act as battering rams to puncture the cell membrane.
"We might be able to use nanomotors to treat cancer and other diseases by mechanically manipulating cells from the inside," said Prof Mallouk.
In addition, he said: "Nanomotors could perform intracellular surgery and deliver drugs non-invasively to living tissues."
The researchers were able to steer the tiny motors with magnetic forces.
The scientists also found that the nanomotors could move autonomously - independently of one another - an ability that is important for future applications.

Destructive forces
"Autonomous motion might help nanomotors selectively destroy the cells that engulf them," Prof Mallouk explained.
"If you want these motors to seek out and destroy cancer cells, for example, it's better to have them move independently. You don't want a whole mass of them going in one direction."
Describing the potential uses of nanomotor technology, the Penn State professor invoked a 1966 science fiction film in which a submarine and its human crew are miniaturised and injected into the blood-stream of a dying man in order to save him.
"One dream application of ours is Fantastic Voyage-style medicine, where nanomotors would cruise around inside the body, communicating with each other and performing various kinds of diagnoses and therapy.
"There are lots of applications for controlling particles on this small scale."
The idea of molecular-scale surgery can be traced back to a lecture by celebrated physicist Richard Feynman in 1959 called "There is plenty of room at the bottom".
In the talk to the American Physical Society (APS), he explained: "Although it is a very wild idea, it would be interesting in surgery if you could swallow the surgeon.

"You put the mechanical surgeon inside the blood vessel and it goes into the heart and 'looks' around. It finds out which valve is the faulty one and takes a little knife and slices it out."