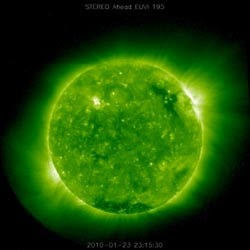 Nassim Haramein states in a video-taped analysis (below) that Earth-sized UFOs are in fact giant extraterrestrial or interdimensional spacecraft, which are accessing our solar system, using the Sun as a black-hole singularity, or star gate.  Mr. Haramein contends that NASA Stereo data of giant solar UFOs prove that extraterrestrial civilizations access our solar system via a star gate on the Sun when using large (Earth-size) vehicle spacecraft.


Giant, Earth-sized UFOs have appeared before around the Sun and have been monitored and recorded by NASA’s Stereo spacecraft.  The present “giant solar UFO wave” which commenced on January 18, 2010 is the most recent of a recurring phenomenon.

According to Mr. Haramein, every Sun contains a black hole singularity.  Advanced extraterrestrial or interdimensional civilizations wishing to access our solar system with large (Earth-sized) spacecraft can do so through the star gate of our Sun. 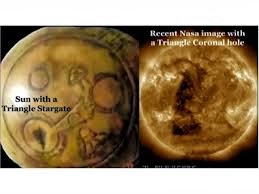 Publicada por Ufomania - The truth is out there à(s) 9:17 PM