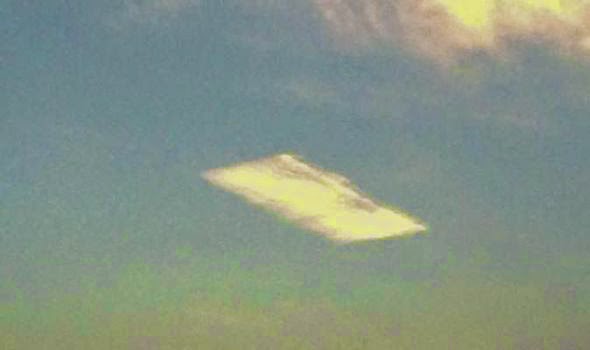 Homeowners in Exeter, Devon wasted no time snapping photographs for Facebook and excitedly posting on Twitter about the flying carpet shaped cloud hanging over the city.
The sharp-edged cloud formation was first spotted on Saturday afternoon and gained mainstream attention when it was tweeted by Laura Gilchrist, an employee at the Met Office.


She posted: "So this evening, over Exeter, there was a rhombus-shaped cloud".
But those looking for a sensational or supernatural explanation for the water vapour suspended in the shape of Aladdin's flying carpet are set to be disappointed.
A Met Office spokesman reassured residents that the cloud just an oddly-shaped contrail – the man-made clouds formed by the water vapour blasted from a plane's jet engine as it moves through the air. 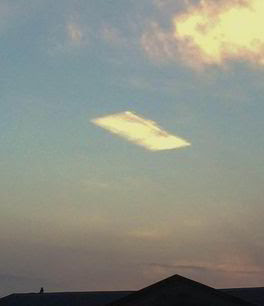 Tweets commented on the cloud's unusual flying carpet-like shape [SWNS]
But while contrails normally appear as two thin stripes tracing a plane's progress through the sky – a mixture of atmospheric conditions transformed this example into a floating rectangle.
The Met Office spokesman said: "In this case an aircraft has moved through a pocket of air with the right conditions for the contrail to form, meaning there is just a short section.
"The wind is blowing at right angles to the contrail, and due to the right atmospheric conditions this is causing the ice crystals in that trail to spread outwards - creating this rectangular shaped cloud.
"It's unusual to see the cloud edges quite so well-defined as in this example but the processes involved are very common"
Source: Express.com

Publicada por Ufomania - The truth is out there à(s) 6:18 PM