DOES A GIANT INDEX FINGER IN EGYPT POINT TO THE TRUTH OF GENESIS 6? 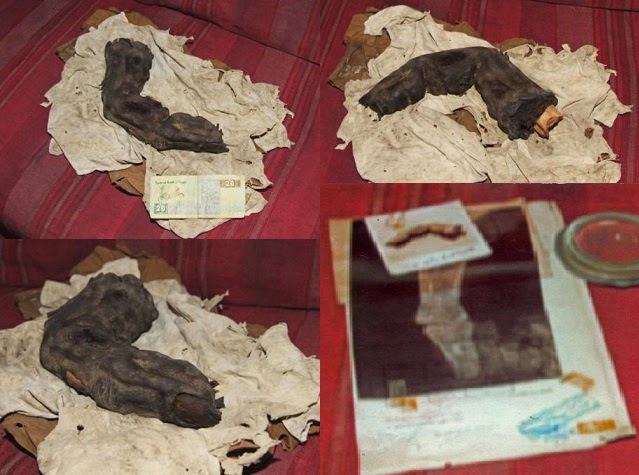 Today, the average male middle finger is about 4 inches long. The index (pointing) finger is usually about half an inch shorter than the middle finger on the average man of today. So what could be said for an ancient, mummified human index finger 38 cm or just under 15 inches long? If it’s a mummified human finger then the owner must have been upwards of 20 feet tall!

The original date of the discovery was in 1988 but the photos come from an article published in the German Bild newspaper in March 2012. A man named Spörri, an archaeologist or treasure hunter (I’m not sure) claimed to have been given a chance to study and photograph the object still held by and its “discoverer”  refused to relinquish it for any price. To be fair with respect to an evaluation of this artifact and the article this description of Bild is from Wikipedia:

The paper is published from Monday to Saturday; on Sundays, its sister paper Bild am Sonntag ("Picture on the Sunday") is published instead, which has a different style and its own editors. Bild is tabloid in style but broadsheet in size. It is the best-selling non-Asian newspaper (after The Times of India became the highest-circulating non-Japanese newspaper) and has the sixth-largest circulation worldwide.[1] Its motto, prominently displayed below the logo, is unabhängig, überparteilich ("independent, nonpartisan"). Another slogan used prominently in advertising is Bild dir deine Meinung!, which translates as "Form your own opinion!" (by reading Bild), a pun based on the fact that in German, Bild is a homophone of the imperative form of the verbGerman: bilden (English: to form) and the nounGerman: Bild, (English: picture, image).

Bild has been described as "notorious for its mix of gossip, inflammatory language, and sensationalism" and as having a huge influence on German politicians.[2] Its nearest English-language stylistic and journalistic equivalent is often considered to be the British national newspaper The Sun, the second highest selling European tabloid newspaper, with which it shares a degree of rivalry.” Wikipedia…
From the Article: “CAIRO -- What on earth is THAT? In the photo we see a giant scary finger. You will recognize it almost immediately, but will still have to look twice. The bone appears to have been chopped off. As if by a hatchet. And very, very old. Mummified. In some places; crumbled. Torn, leathery skin. Split, loose nails.


Yes, indeed, the gruesome relic seems to be a finger, but huge, 38 cm long. What is the secret behind it? Few people have ever seen this finger since 1988 up close and now it's photos are being viewed in Germany.

It has an x-ray image to prove its authenticity (photo below). On the last day of his private investigation, Spörri was given leave in 1988 to contact an old man who was a grave robber who found it. About 100 kilometers northeast of Cairo, the meeting took place in a farm house at Bir Hooker. For $300 Spörri could take a look at the family treasure of unsold items of the grave robber. Wrapped in old rags was the bone and dermis.
Spörri told our news reporters: "It was an oblong package, that smelled musty. I was totally flabbergasted when I saw the dark brown relic was allowed to take it in hand and also take pictures, a bill put next to it to get a size comparison. "The bent finger was split open and covered with dried mold. "It was surprisingly light, maybe a few hundred grams.
My heart was in my throat. It was incredible! The owner of the finger would have been about twenty feet tall… "The grave robber showed the Swiss man that the finger also had a certificate of authenticity and an X-ray image.
Both are from the 1960s when it was originally found. "The grave robber implored all in the name of Allah saying it was sacred.
He would not sell the finger. It was to him and his family much too important … " Today Spörri regrets that he was the only person with the photos of the finger. For years it occupied his thoughts. Scientists were not interested in the finger, which they consider impossible to be real.

"The Relic does not fit into their theories," the discoverer told BILD.de. He did not want to make a mockery of the experts, and decided to let the story rest. It was not until 2009, he went back to search for the ancient Arabs and the relic. But the traces in Bir Hooker had come to nothing …”

Conclusion: Is this a real artifact? Not if you ask science. Ironic in that the grave robber tried to use the scientific process-the xray to overcome the objections of the naysayers. I say again that for believers if this proves to be real it serves to reinforce what we already believed in terms of biblical accuracy. If it proves to be a fake we will still believe that David cut off a giant who was a remnant of the Nephilim’s head. If it proves to be real and science is forced to reckon with it and other giant artifacts—science is going to have some explaining to do.

Publicada por Ufomania - The truth is out there à(s) 6:26 PM